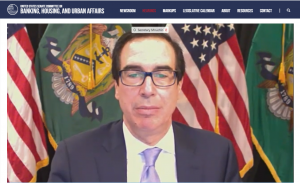 In his opening statement U.S. Department of Treasury Secretary Steven Mnuchin stated that the Department has “worked closely with the[U.S.] Small Business Administration [SBA] on the Paycheck Protection Program (PPP) to ensure the processing of more than 4.2 million loans for over $530 billion to keep tens of millions of hardworking Americans on the payroll.”

Federal Reserve Chairman Jerome Powell added that in order “to bolster the effectiveness of the PPP, the Federal Reserve is supplying liquidity to lenders backed by their PPP loans to small businesses.”

Senators throughout the hearing asked similar questions regarding the PPP including loan size, underserved and rural communities, unemployment insurance, flexibility on the 75/25 rule, and loan forgiveness guidance.

U.S. Sen. Jerry Moran (R-KS) and U.S. Sen. Kyrsten Sinema (D-AZ) both asked Secretary Mnuchin about the loan forgiveness process within the PPP and if there would be further guidance administered regarding the process, noting that the lack of guidance has made it difficult for small business owners to plan.

Secretary Mnuchin said he believed the guidance that was released last week deals with most of the major issues.

To view the hearing in its entirety, click here.