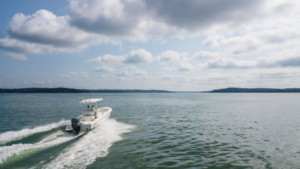 CHICAGO — (BUSINESS WIRE) — As the summer boating season gets underway this weekend, the National Marine Manufacturers Association (NMMA) announced today new data that shows unit sales of new powerboats in the U.S. reached 276,000 in 2018, an increase of 4 percent from 2017, the highest levels the U.S. recreational boating industry has seen in 11 years.

Marine expenditures, spending on boats, engines, trailers, accessories and related services, were at an all-time high in 2018 at $42 billion, up 7 percent from 2017.

“Sales of new boats and boating expenditures have been on a consistent upward climb for eight years, with some segments reaching pre-recession sales volumes,” said Thom Dammrich, NMMA president. “As millions of Americans head to the water this summer, marine manufacturers and dealers are preparing for the busy selling season that coincides with peak boating months. With consumer confidence high, unemployment low, wages on the rise and interest rates holding level, we anticipate the recreational boating market to remain healthy in the year ahead with modest growth of up to 2 percent in new powerboat unit sales in 2019.”

The increase in new powerboat sales in 2018 was led by:

U.S. Recreational Boating by the Numbers

For a further look at the state of the U.S. recreational boating industry, below are key statistics that provide insights on the industry’s size, makeup and demographics.

The National Marine Manufacturers Association (NMMA) is the leading trade organization for the North American recreational boating industry. NMMA member companies produce more than 80 percent of the boats, engines, trailers, marine accessories and gear used by millions of boaters in North America. The association serves its members and their sales and service networks by improving the business environment for recreational boating including providing domestic and international sales and marketing opportunities, reducing unnecessary government regulation, decreasing the cost of doing business, and helping grow boating participation. As the largest producer of boat and sport shows in the U.S., NMMA connects the recreational boating industry with the boating consumer year-round. Learn more at www.nmma.org and get engaged with us on Twitter and LinkedIn.