DENVER, Colorado – One of my friends recently purchased one of these spunky, option-laden sedans (2012 Chrysler 200) and was very happy with her decision. A few months later, however, she said that her key fob had stopped working and some of her interior lights had failed as well. 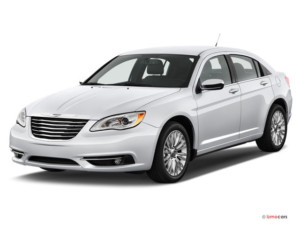 She and her Dad found that one of the fuses had blown in the under hood junction block. So they replaced it, and the key fob and interior light came back to life.

The suspect fuse (#14 and see-through blue in Figure 1) did its job for several days, and it blew again. She brought it in to us and we confirmed the blown fuse, installed a replacement, and it remained intact.

And there it is, the word we often dread: Intermittent. 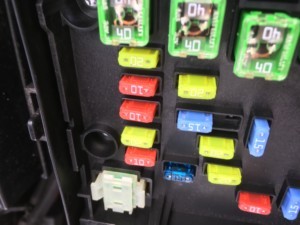 It evokes all manner of memories dealing with time-wasting, hair-pulling and frustration-laden repair adventures. Sure, we all like a challenge, and we all love the feeling of besting an elusive electrical poltergeist through logic, reason, diligent research and determination.

So that last reason is why I accepted her repair… for the potential elation that accompanies the successful exorcism of a pesky electrical poltergeist.

I searched our online repair information looking for potential causes for a blown fuse #14, but nothing emerged. I then connected our fuse adaptor and amp clamp, hooked it to my DVOM, set it to “MIN/MAX” and went for a drive.

With no abnormal changes in the current reading, I cycled everything that works off of that circuit, especially the key fob, infotainment system, and interior lights. 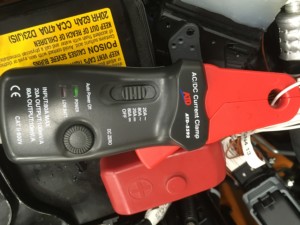 Now, with so solid leads in the crowdsourcing arena, I talked my friend into letting me drive the car for 24 hours.

I purposefully drove over rutted roads and railroad tracks, all in an attempt to force our short circuit to occur.

When I was unable to make the current spike on my meter, I invited my friend to take me for a drive, asking her to show me the routes she took when the fuse failed, just in case there was a combination of factors I hadn’t tried.

All accessories remained functioning and there was no spike on my DVOM, so I gave her car back to her with instructions to bring it right back when it happened again.

A full week later she brought it in to me, telling me it happened on her way in to work. This time I quizzed her pretty hard to find out exactly what she had used on her vehicle that morning. Her list was key fob, radio, heater, and accessory socket for her phone charger. It was then that she told me she had been applying makeup at “a few stoplights” on her way in.

Since the lights in the sun visors were part of the fused circuit, I installed a new fuse with my DVOM and amp clamp, and then proceeded to cycle the driver’s sun visor through all of its various angles (Figure 3). That was when I finally registered a higher “MAX” reading on the MIN/MAX range on my meter! It only happened once, but it was enough to have me pull the two screws and scrutinize the sun visor more deeply. 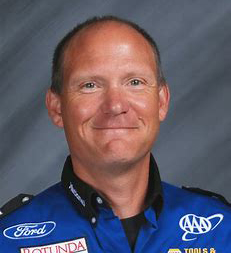 As I dropped the sun visor down, I immediately had that terrific sense of elation wash over me because I knew that my search was over!

While our Chrysler 200 was being assembled at the factory, one of the sun visor screws had compromised the B+ insulation, revealing bare copper wires, and creating our pesky intermittent short-to-ground.

Those assembling the vehicle would never know they had done this, and it happens very intermittently on all manner of years, makes and models. 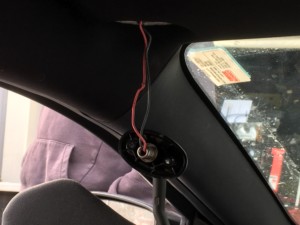 After I finished doing my happy dance, I took time to record my path to finding this particular elusive poltergeist, and I thought about what I could use in the future to help me find similar issues faster. 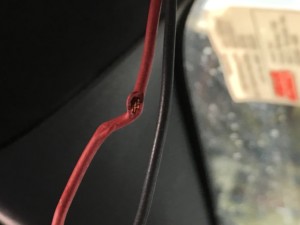 Ultimately, when my friend told me that she’d been applying makeup at stoplights, a little “bulb” appeared over my own pea-brain that ultimately led me to discover the root cause.

Could I have conducted a better customer interview? Yes.

And that’s my takeaway from this latest time-wasting, hair-pulling and frustration-infused adventure.