A Tale of Two CRVs 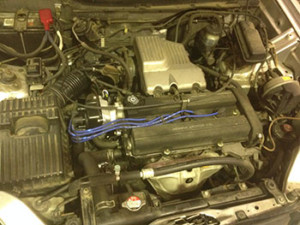 Figure No. 1: CRV came to us with many new ignition parts.

If your shop is like ours, Honda CRVs make an appearance weekly. Mostly for maintenance, but sometimes they need to be diagnosed. We’ve seen several lately with around 200,000 miles and still providing reliable service.

Our first CRV came to us with a concern of intermittent misfire, along with periods in which the engine would not restart when hot. Our customer had been to other repair facilities, and he had an invoice showing a new distributor, spark plugs, plug wires, filters and an oil change (Figure No. 1).

We began our diagnosis with an onboard diagnostics (OBD) scan, revealing the codes shown in Figure No. 2: misfire codes P0300 through P0304, which included all cylinders. Our 2.0-liter engine was not acting-up for us during our evaluation, so we confirmed the previous repairs and found no issues. Because I’m used to seeing so many ignition issues associated with misfire codes and these Hondas, we removed the distributor cap to check the integrity of the rotor and all internal components. We then drove the vehicle hoping to experience our customer’s concern, but to no avail. Where to go from here? 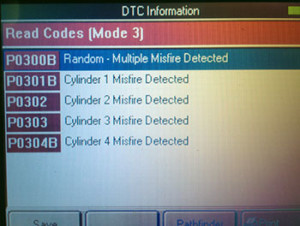 Figure No. 2: The five codes we pulled from our CRV.

While searching technical service bulletins (TSBs) for this issue, I came across a Honda TSB numbered 03-038 under Fuel and Emissions. This TSB (Figure No. 3) addresses our customer’s rough-running problem – although we were still unable to reproduce the misfire and it addressed the five misfire codes we had in his powertrain control module (PCM). The bulletin listed the probable cause as “One or more exhaust valves have receded into the cylinder head,” and it listed the corrective action as “Inspect the valve clearance, and if necessary, replace the cylinder head.”

I thought the leap from inspecting valve clearance to replacing the cylinder head was an unusually big one, so I quizzed my customer about any previous valve adjustments. He said he hadn’t had any performed in the three years that he’d owned the CRV.

Since we hadn’t found any other probable causes for the multiple misfire codes, I sold him on a valve adjustment. And once we removed the valve cover and began inspecting the exhaust valves, we found them all to be below 0.09 millimeter, which is below the recommended specification.

The TSB for this issue had the following specific steps for this procedure:

1 Remove the cylinder head cover and check the clearance on all exhaust valves.

2 Ask the customer if the valves were adjusted shortly before the problem occurred.

I was faced with telling my customer that he may need a cylinder head in the future, which did not come as a complete shock because this CRV had 140,000 miles on it. Still, it was unsettling. After we adjusted the valves and released the vehicle to our customer, he said that the misfire had not happened again, so it would seem his valve seats were receding into his cylinder head, and he was running on borrowed time.

An interesting line in the TSB states: “Out of Warranty – Any repair performed after warranty expiration may be eligible for Goodwill Consideration by the district Parts and Service Manager or your Zone Office. You must request consideration, and get a decision, before starting work.” After I researched the number of issues involving this “receding exhaust valve” problem, I was wondering if Honda had ever provided any of this assistance to a shop or customer.

I filed this one under the heading: Things I’ve Never Seen Before! 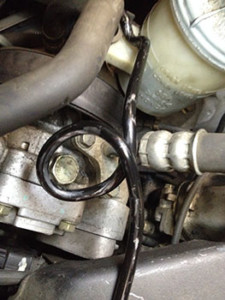 Look at Figure No. 4. What are you looking at? It’s the hood prop rod. And why is it bent, you ask? A great question.

This customer had her CRV towed in with a no-start problem, and the very first thing I did was confirm the issue. When I turned the ignition key, the engine just made a dull thunk and didn’t turn over. On opening the hood, I observed the hood prop rod lying over the drive belts. When I realized what had happened, I couldn’t believe it.