NAPERVILLE, Ill.—IMR Inc., an automotive market research firm, has released new insights on the current financial situation of independent repair shops in light of the Covid-19 pandemic as well as insights on disruptions in parts delivery.

As of Dec. 1, 91 percent of independent repair shops have reported a decrease in revenue this year.Of those shops, 1.3 percent are expecting that their business won’t financially recover from the hardships brought on by the pandemic.

However, an additional 18.5 percent of shops responded that their revenue has since returned to normal.

Compared to a similar survey taken in May 2020, shops had a more optimistic outlook on when they anticipated their businesses would experience financial recovery. Nearly 34 percent of shops believed it would take less than a year to recover, which has dropped to 22.9 percent as of the December survey.

Ten months into the pandemic, 17.4 percent of shops anticipate that it will take more than a year to financially recover compared to 2.5 percent this past May. Forty-one percent of shops stated that they don’t have any idea when revenue will return to normal levels compared to 60 percent when asked the same question in May. 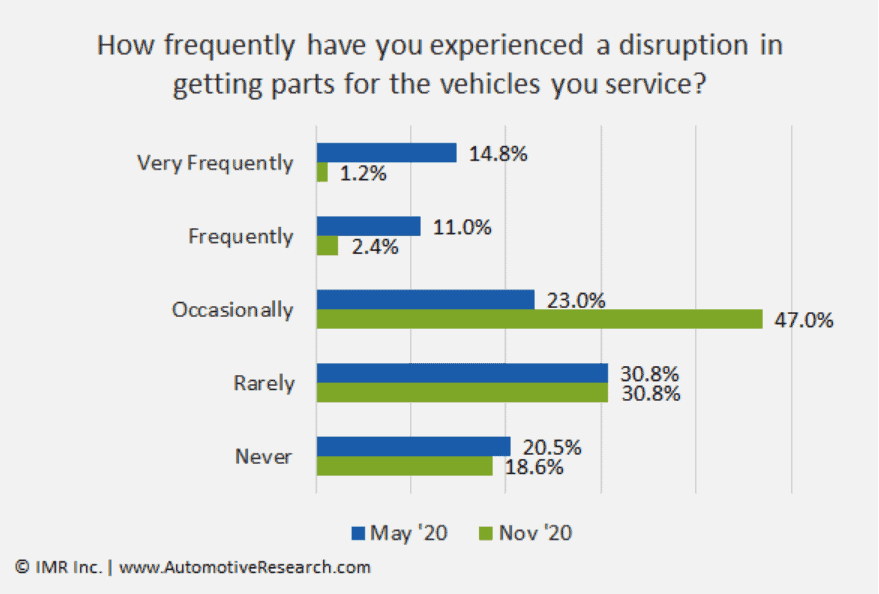 During the peak pandemic lock-down months, independent automotive repair shops reported having a disruption in sourcing or purchasing parts. In May 2020, 25.8% said they either ‘Very Frequently’ or ‘Frequently’ had a disruption. That has now decreased to 3.6% and more shops are experiencing this issue ‘Occasionally’.

In addition to financial challenges, independent repair shops are also still experiencing some delay in parts delivery. When asked about delivery delays in May, 25.8 percent of shop owners stated that they were either “frequently” or “very frequently” experiencing disruptions.

Among those shops having issues with parts supply, 58.6 percent are “rarely” ordering those delayed parts from an alternate supplier, where 11 percent are “frequently” ordering from another source.

As of December 1, 2020, nearly 20% of independent automotive repair shops report purchasing parts from suppliers that are new to them, down from 47.2% in May. The purchase frequency is low with 58.6% reporting they rarely purchase from these new suppliers.