Recently, Deb, my wife and partner at ACDC, pointed out that I have not covered Mitsubishi in this column. Was it that the 1985 Galant that sat on my used car lot for months and then after it was sold the transmission let go during the warranty? Or maybe it was because the Mirage had broken jet valves we hated to service?

I have never been a big fan of this Japanese automaker but things do change over time. Just look at Ford. As they improved and changed their ways over the last 10 years. This time I will break with tradition and compare not the best-selling but the top-of-the- line model year (M/Y) 2014 Mitsubishi Outlander GT to the M/Y 2007 Mitsubishi Outlander XLS. I will try to be fair and let go of the past, but some cars do get on your list.

Back in the 1980s, Mitsubishi built vehicles that most shops did not enjoy servicing. Oil leaks, oil-burning engines, transmissions that blew up, jet valves snapping and customers who were not interested in putting money into their cars. Along the way the brand survived, but not without its share of problems. Cars like the Starion ESI-R, the Diamante and Eclipse were unique and had gizmos galore, but sales lagged behind the other Japanese brands.

In the 90s, the economic climate hurt Mitsubishi’s ability to fund their R&D department to bring out competitive new products. To make it worse, the facelifts the company chose were panned by the press and the Diamantes imported to the U.S. were sold at huge discounts and the Galant sedan fared no better.

The Outlander crossover took a slightly better road. It started life here in M/Y 2003 as a reasonable alternative to the large selection of SUVs. Suzuki was a strong competitor to Mitsubishi 10 years ago as this segment was growing.

In M/Y 2007 there was only one engine for the Outlander, a 3.0-liter V-6 that produced 220 horsepower and 204 pound-feet of torque. It was not strong enough in the mid-range to compete with the optional V-6s in the Toyota RAV4 and Hyundai Santa Fe. It also was asked to move a vehicle that weighed 3800 pounds in all-wheel-drive form. A six-speed automatic transmission with optional paddle shifters was mated to a front-wheel-drive system or optional four-wheel drive. Stability control was standard. After 21,493 were built, a defective brake lamp switch created a recall so check the brake lights when one shows up in your bay to be sure the LED lights work. Of those Outlanders, 5,400 also had a connector for the power seats relocated so that corrosion of that connector would not heat up and start a fire. This is a snow-belt issue. Identifix, a great resource for help and reference materials, lists 187 TSBs, two recalls and a half dozen articles about important technical innovations that Mitsu­bishi had developed for the Out­lander. Overall, this vehicle gave Mitsubishi a better reputation than their vehicles did 10 years earlier, but the poor sales of SUVs in the past years have not helped make this a top seller. All-in-all this was not a bad vehicle to service and repair.

Unlike Suzuki, which finally surrendered in the American car market this year, Mitsubishi appears determined to keep going. The 2014 Outlander SUV represents its best effort given Mitsubishi is still dealing with a limited budget and very small market share of 0.4 percent in the U.S. 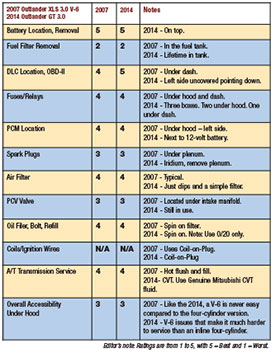 Ten trim levels are offered and pricing will range from a manufacturer’s suggested retail price of $22,995 for the base four-cylinder model to $33,895 for the top-of-the-line GT trim with an added touring package. Mitsubishi says the base GT model without the touring package, which carries an MSRP of $27,795, is $800 less than the comparable outgoing model. More for less.

The 2014 Outlander lost 220 pounds buy using high-tensile steel. This allows the three-row crossover to weigh less than the competitive two-row models like the Honda CR-V and Toyota RAV4. The improved chassis stiffness and electric power steering system make this a better handling SUV than the 2007.

Even though we are critiquing the V6 GT, I feel compelled to give the 2014 Outlander base model a nod. The powertrain is a 2.4-liter I-4 engine coupled to a CVT transmission. Many other OEMs such as Subaru and Nissan also use CVT with I-4 engines. Most of the crossover-buying public is accepting these less powerful versions as the fuel economy is so much better.

But some want (and a few need) more power, so back to the Outlander GT. It is equipped with the company’s MiVEC 3.0-liter V6; 224 hp at 6250 rpm, 214 lb.-ft. at 3750 rpm backed by a conventional six-speed automatic transmission. The automatic is geared for maximum fuel economy, but does allow acceleration of 0 to 60 miles per hour in 6.8 seconds. The fuel economy is 20 mpg in the city and 28mpg highway. It requires premium fuel so the four-cylinder is more popular. The days of the V-6 Outlander may be numbered.

Standard equipment and safety technology geared toward the crossover customer are loaded into the GT. Automatic climate control is standard on all trim levels, as is a split-folding third row, the latter made more usable by virtue of sliding second-row seats. Depend­ing on the options selected, buyers can also get lane-departure warning, radar-based adaptive cruise control and a forward-collision mitigation system capable of warning the driver, pre-charging the brakes and even automatically braking the vehicle if a collision is imminent. At 15 mph or less the SUV will stop itself.

The plug-in hybrid Outlander is coming

If you are asked by a customer, “What should I buy?” a green SUV may be for them. You know I would recommend that! In M/Y 2015 Mitsubishi will release the plug-in hybrid Outlander with twin-motor 4WD. Mitsubishi claims a 30-mile EV range and a charging time of as little as 4.5 hours. I had a chance to get to know this Outlander at the last SAE Congress in Detroit. It will also power your house if you lose electricity. It is available in Japan now.

When comparing the two years, what stands out is the four-cylinder is now a popular version and the three seats help those who have lots of kids and need AWD. Suzuki threw in the towel and we all know that success is sometimes hanging on by your fingernails when others let go. Mitsubishi also designed an all-electric car in Japan for mass production before any other OEM did, even Nissan. It is for sale here and it’s called the i-MiEV. It is a peculiar looking, four-seater that offers rear drive and fast charge times. This company really is at odds with itself, not knowing what to offer. Will they succeed in the American market? That is a tough call, but their cars and SUVs need service so take them in and do what you can. The owners will appreciate it as some dealerships have closed. It may not be the best vehicle around, but at least they are still around.