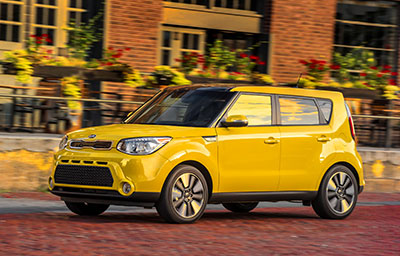 Let’s take a look at Kia. Is it easy to service?

Kia was a poorly made car when this Korean car company brought its 1994 Sephia to America. Kia made cars for Ford/Mazda prior to 1994, but most people had no idea where they came from. Remember the Aspire from Ford? That was a Kia.

In 1997, Kia declared bankruptcy and Hyundai Motor Company acquired 51 percent the next year. Kia was far behind Hyundai in quality and modern designs, but Kia has caught up. Recently, the two companies have seen growth that makes other OEMs envious.
The name “Kia” derives from the Sino-Korean words “ki” that means “to come out” and “a,” that stands for “Asia,” or “Made in Asia.” Some Kias are now made in America.

The Soul has fans

The quirky commercials and this strange, boxy car created a following. Kia even designed the new Soul for an electric drive system as well as gasoline. But did they end up with a car a technician would love?

In model year (M/Y) 2010, the Kia Soul was introduced to America. A pair of hamsters told the story in commercials and Kia won many industry awards for advertising. It was in a field of weird-looking, boxy, small urban transportation. It also proved to be the most popular. But did the technicians who work on Kias, and specifically the Soul, like their jobs? That is what I went in search of.

A couple years ago, my wife, Deb, and I traveled to St. Louis. Deb loves the Soul, so when I saw one at the rental agency, that was my present to Deb. Lots of room, and it had the 2.0 liter engine, so there was plenty of power. The stereo was good and Deb loved the color. Fuel economy? I managed 22 mpg in city driving. Environmental Protection Agency city numbers for that car were about the same. Gas then was close to $3.75 a gallon, and my carbon footprint felt like a size 16D. All else was just fine.

This was a 2013 M/Y and under the hood I found a black plastic cover that pops right off. Under that were four coils, an old-fashioned positive crankcase ventilation (PCV) valve you could actually see and everything a tech must do on a routine service was staring at me. Large under-hood area, 4 cylinder, basic front-wheel-drive layout and therefore, lots of room to swing wrenches and remove worn-out parts.

Checking my trusted source of technical information, Identifix, I noted a timing chain with dual cams with no real problems. There have been three safety recalls for some 2010 models concerning the mood lights. This car was built for a generation a lot younger than me, and the interior lighting can be changed to fit the color of your mood. I did not know moods had colors, but then, I grew up with black and white television.

There were also two recalls that both had to do with brake light switches, and I am confident that the red brake lights did not turn pink if you were unsure about whether or not you really wanted to stop. Maybe someday we will have brake mood lighting for the ambiguous. Don’t forget that the brake light switch must work to start a car with a “Push to Start” button. A malfunctioning stop lamp may cause an inability to deactivate the cruise control by depressing the brake pedal.

Additionally, a malfunctioning stop lamp switch may also result in intermittent operation of the brake-transmission shift interlock feature, preventing the shifter from being moved out of the PARK position and, on the Soul, cause the electronic stability control (ESC) malfunction light to illuminate. All because of a defective stop light switch. 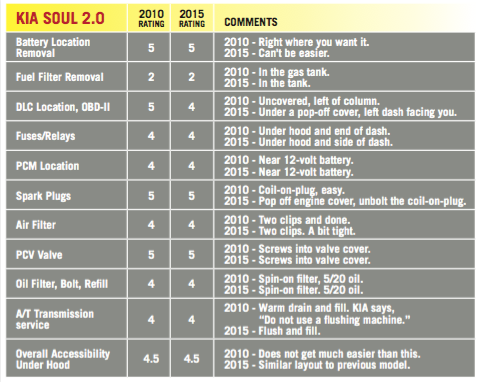 The Soul was redesigned for the 2015 model year. Kia made some changes to the chassis, interior and handling. The 2.0 engine stayed with port injection while the smaller, 1.6-liter engine was changed to direct injection. Some tweaks were made to improve the thirsty nature of this car.

The Kia Soul! (the exclamation point designates that it is a high-end model) is for those who want all the bells and whistles. The 164-hp, 2.0-liter, four-cylinder engine has to power a 2,837-pound box and even though the curb weight went up while the peak horsepower and torque went down, the car feels better due to suspension upgrades. Customers and technicians both like this car, and that is rare these days.

I drove over to Wagner Kia, near Worcester, Mass., and walked in unannounced with my journalist business card in my hand. I was greeted by a pleasant woman who paged a salesperson. Shirley Price was not only helpful; she went out of her way to help me find a used Soul to look at in a snowy parking lot. The parts department answered my questions and then I was off to service.

Much to my surprise, their top tech, Kevin Shields, was not only well versed in Kia but worked with me in the late 1980s at Van Batenburg’s Garage Inc. It is always great to find people you haven’t seen in decades who are doing well and who enjoyed their time at my shop. Kevin made this article better and the entire staff at Wagner Kia deserves a mention.

In California, you can order an electric Soul. No gas, just a big battery and a plug. The electric motor drives the front wheels, is rated at 81 kilowatts (109 horsepower for those of you not metric bilingual) and produces 210 pound-feet of torque. A new A/C system also provides heat for the cabin. The Soul EV carries a base price of $34,500, but you can pay the federal government $7,500 less next year if you buy one. Some states offer more financial incentives. The one I drove handled better than the gas version, because the weight of the battery pack was low to the ground.

The Kia company has learned a lot in 20 years, especially the last five. Its products are popular and techs don’t complain much. The driveline of both vehicles are so similar that the ratings are almost identical.