It has been well over 19 years since the first hybrid in America was sold – the Honda Insight.

Now, another Insight is here.

Honda introduced the first modern hybrid to America, but not the world. That honor goes to the Toyota Prius.

In December of 1999, a weird little two-passenger car with fender skirts started showing up at Honda dealerships. That was the last century and a lot has changed since then.

Honda has produced many other hybrids like the Accord, Civic, and CRZ, but they never took off like the Prius.

Market share was lost and Honda Hybrid owners were not happy. A lawsuit was filed and the owner won. Sales of Honda hybrids slowed.

Was it the lack of electric drive at slow speeds?

Software updates that lowered your fuel economy but did little else to fix the problems?

Dealerships that seemed not to care?

Or was it that the Prius was just that good?

Then Ford came out with the Fusion HEV in model year 2010 and Hyundai/Kia the next year. Almost every manufacturer has built a hybrid and some were really good.

Has Honda found their way back or were they never there? 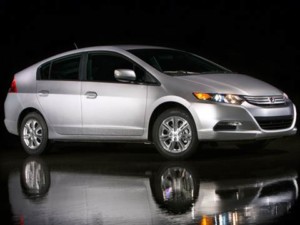 What happened to that hybrid? It was discontinued in model year 2014 due to poor sales.

AutoInc. has been on the independent technician’s side for a long time. Fixing cars isn’t easy and sometimes the OEMs make it harder with poor designs.

Let’s find out what Honda did with the latest Insight.

Did they fix the inherent problems?

Did the designers make it easier to fix and maintain these Honda hybrids?

We will focus on the 2019 Honda Insight this time around. As I have said many times, I will not let my bias change the real story.

For those of you reading this series for the first time, I compare a new model to its older sibling. This report is to ascertain whether or not this car is getting better for techs.

So far we have reviewed over 60 models from most every major car company. 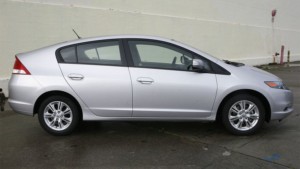 The original Insight was a two-passenger hatchback. It was made in Japan in the same small factory that built the NSX and the S2000. It had an aluminum chassis and was very high tech for its time.

The hybrid system was called “Integrated Motor Assist” (IMA) and it was very simple. One high voltage three-phase motor was installed where the flywheel would sit. The electric motor had three jobs to do. It was the primary starter for the ICE (internal combustion engine), added more torque to the crankshaft on demand from the PCM and was a brake to slow down the car and recharge the high voltage battery pack.

In many ways the first two Insights shared the same basic approach: Make the car lightweight, streamlined, and efficient.

The 2010 Insight did allow three more people to get on board and hold more luggage, but was not exciting and low tech. 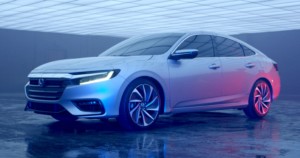 The newly redesigned Insight has a li-ion battery pack that the earlier Insights did not have. Honda started using lithium in their Civic in model year 2012 and the CRZ in model year 2013–  and battery problems went away.

The old nickel metal hydride (NiMH) had many problems as they aged. Lithium has monitor circuits for each cell and that keeps each cell in balance with the others.

The “out-of-balance” codes – P1446 and P1447 – are gone. The air-cooled inverter and DC-DC converter are liquid cooled now, so any heating issues with the power electronics are over.

The one motor IMA system has been retired for a “Two Motor” CVT of sorts, unique to Honda HEVs.

More about his transmission coming up.

With two electric motors this new hybrid has a net 151 horsepower and 197 pound-feet of torque. This is a very good car. Finally, Honda got this one right. 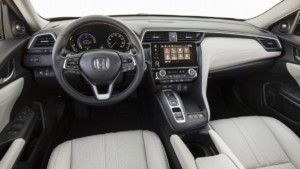 There are four driving modes: Normal, Sport, Eco and EV.

Eco mode maximizes electricity only operation and gets you the best MPG.

Active Noise Control uses the audio system’s speakers to further temper road noise except in Sport mode, a difference that can be clearly heard when driving more aggressively.

As in all hybrids, the capacity of the high voltage battery, 1.1 kWh in this case, may give you a couple miles of electric only operation at low speeds on flat ground.

The EV button lets you choose when to let that battery power the wheels.

The ICE will kick in when needed in any mode, but it is not connected to the wheels at lower speeds, so the revs will rise and fall independently of vehicle movement.

That will seem weird, like the first Chevy Volt, and will take some getting used to. At higher speeds the ICE is connected to the wheels. 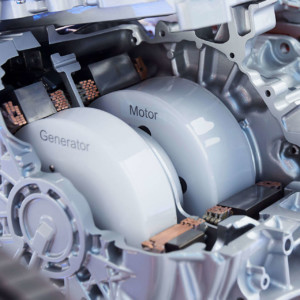 The big news is the new transmission. It is the art of simplicity.

Here is how it works: One motor (MG1) starts the ICE when the single clutch is open (see diagram).

Honda no longer has a 12-volt starter motor as they did with the IMA system.

MG1 can also act as a generator when the clutch is open and the ICE is running.

When slowing down with the ICE off and the clutch open, MG2 is a generator and works with the recuperative braking system to add electrical energy back into the li-ion battery pack.

When the clutch is “open” this HEV can be driven in EV mode with or without the ICE running.

When the li-ion battery is low on a charge the ICE starts and MG1 is now a generator adding electricity to the high voltage battery and the inverter for MG2. This is normally “city” mode.

With the clutch closed, the ICE can take over all the motive power requirements and the Insight is now a gas car. Of course without an alternator, MG1 and MG2 are spinning so one will be a generator and keep the HV battery charged enough to keep everything powered up.

The clutch can only close when the ICE is in the correct rpm range to the road speed. At that point it is direct drive with no way to change the gear ratio.

If you need more power than the ICE can contribute, MG2 will become a motor and add that extra torque to the drive wheels.

No planetary gear set as in the Toyota and Ford design but it has the same effect. Simple. Brilliant.

This Honda will still need oil and filter changes and valve clearance adjustments.

The electric motors are cooled by the ATF, so changing that fluid will also be helpful in keeping any moisture from creating internal high voltage leaks.

Check for software updates and get to know what is normal by driving one.

They are in dealerships now so take an Insight for a road test but be careful, you may want to buy one.

Downs –  2010 Honda Insight: This old hybrid will most likely require battery packs every 150,000 miles. Lack of pure electric drive and electric A/C compressor means city mileage will not come close to the EPA estimate. No electric drive at low speeds.

Ups – 2019 Honda Insight: A lot of hybrid for 24K. Better HV pack than before. More power. Electric A/C compressor and a much better transmission.