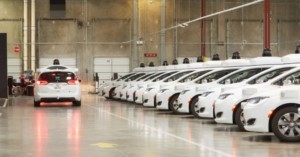 Whether you like it or not, self-driving cars will be hitting the road in full-force in the coming years.

Thanks to new technology developed by companies like Tesla and even Uber, autonomous vehicles will become a staple of modern culture, with nearly 10 million self-driving cars expected to hit the road by 2020.

Yet, not all is well across the autonomous landscape.

Like any new technology, there have literally been speed bumps in the world of self-driving cars. From accidents to malfunctioning AI, self-driving vehicles are still very much in their infancy.

However, new research in the world of autonomous vehicles has uncovered another potential issue down the line, parking.

Anyone living in a metropolitan area will tell you that parking is always a long-winded adventure.

According to a new study, autonomous vehicles could create a problematic parking issue.

Imagine a scenario. You and your family are dropped off by your electric car in the center of the city. However, like most already know, parking in the city is expensive, so rather than park, your vehicle cruises around the city until you’re done.

Though this may sound like a sweet set-up and a potential perk of owning an autonomous vehicle, this could be detrimental to transportation in the near future.

“Parking prices are what get people out of their cars and on to public transit, but autonomous vehicles have no need to park at all. They can get around paying for parking by cruising. They will have every incentive to create havoc,” said Adam Millard-Ball, an associate professor of environmental studies at the University of California, Santa Cruz.

Robot filled gridlock is a real potential issue if something is not done.

Professor Millard breaks down his concerns further in his published paper, “The Autonomous Vehicle problem.” In his paper, he estimates that just the presence of the relatively small amount of 2,000 self-driving vehicles in the San Francisco area will slow traffic to less than 2 miles per hour.

With where the autonomous vehicle market is headed, imagine what would happen if tens of thousands of vehicle were to hit the road. What’s Millard’s solution? Regulation and congestion pricing may ease the transition into the driverless world.

Self-driving owners might be charged just a flat fee upon entering a city or more sophisticated models could charge by miles driven, or assign different fees to particular streets.

Though Millard’s proposed idea does tackle the issue at large, there are other potential solutions to the gridlock issue. The emergence of the smart city could be equally important to the rise of self-driving cars.

In a smart city, cars could be monitored and controlled, optimizing traffic pattern via an IoT ecosystem. Properly addressing the challenges of this inevitable automotive change will lay the framework of how this technology will evolve.

Taylor Donovan Barnett/Author: From New York to the Czech Republic, Donovan has collaborated with top companies like Google, DIVR Labs, ŠKODA Auto, and tAdy Group to produce great content. Throughout his career, he has helped companies bring their visions to life by creating engaging copy and imaginative imagery. Technology, and how it will be used to rethink creativity greatly interest him. When he is not writing or designing, Donovan is studying to become a machine learning engineer and experience designer. Over the past 4 years, his work has taken him to over 25 different countries and he hopes to double that number in the next few years.

EDITOR’S NOTE: Special thanks to Taylor Donovan & InterestingEngineering.com for allowing us to share this story.