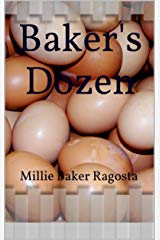 “Dear Acquisitions Editor, I helped my eleven bright kids with college expenses by writing historical romances for Doubleday’s library editions as well as for Twin Circle of Los Angeles, the largest Catholic weekly in the country, a family humor column, Baker’s Dozen. The enclosed appeared in their October 10, 1982 issue, so long ago and in such a different venue, I hope previous publication won’t preclude it from your consideration. Thanks for reading.”

EDITOR’S NOTE:  Got this beautiful note from Millie Baker Ragosta about an even more beautiful story in my email this morning. Couldn’t help but share. Evokes so many good memories!

There are certain rites of passage in our culture that every young man undergoes. Some of them, I’m sure, their mothers never hear about.

One I have heard about is known as The First Car Purchase and I believe the ancient custom of making young men run the gauntlet to prove their manhood was a piece of cake compared to what the average mother goes through when her man-child buys his first car.

Last spring, our eldest son, Vince, Jr., bought an ancient pink Buick that could easily have towed the Queen Mary.

“Not really. Ed knows how to do it; he and Greg will help me.”

I thought, At least, they’ll be here . . . where I can keep an eye on them . . . although, to be honest, I wouldn’t know a set of brakes from the ignition thing; there was no chance whatsoever I would have any idea what they were doing.

Our driveway soon acquired more grease than the pit-stop at the Indiana five-hundred and I couldn’t tell Vince from his buddies since they were all coated with it; the fumes that crept into the kitchen made everything I cooked taste like petroleum.

The leaves fell off the maple trees and stuck in the gunk now coating our driveway. When the first icicles formed along the spouting, the intrepid “mechanics” pushed the car into our integral garage to work on it, pausing only to grab sandwiches and milk for dinner.

Christmas came and even our tree smelt like petroleum.

Finally, in February, the three boys confessed they might need “just a little help.” So, papa Vince called Pete’s Auto Body to come with the wrecker and haul the car into the shop. Friends who lived near-by reported peals of laughter as Pete and his mechanics uncovered more of the boys’ “auto-surgery.”

I can’t remember what eventually happened to the big, pink vehicle; all I do remember about it is that young Vince survived his “First Car Purchase,” served in the army, married and—like his dad—became a casualty insurance man. He also inherited his dad’s abiding sense of responsibility for the family, no matter what happened.

When our second son’s turn for the First Car Purchase came along, pragmatic Art contented himself with buying his sister Kathy’s Pinto . . . the model they kept recalling.

I consider his rite of passage relatively successful since he’s still speaking to Kathy. He’s now a real “rocket scientist,” with a degree in aeronautical engineering; his living-room walls are hung with thank you posters signed by astronauts. Did buying a Pinto teach him anything useful? You bet it did; he never holds a grudge and— metaphorically speaking—he always shoots for the stars.
Kevin bought a motorcycle which his father flatly refused to allow him to license for highway driving.

“You can ride it on our property,” Vince conceded, whereupon Kevin began riding the darned thing in a circle around our four-acre “mini-farm,” with our house right in the middle, until a ditch developed. Had we filled it with water, our huge old “manor” would have looked like a medieval, moat-enclosed castle. A bonus for all Kevin’s driving around in circles taught him the patience required as a Pediatric Intensivist, pondering, studying . . . and praying on how to cure desperately ill children.

My sister, Alberta gave our college-freshman, Joe a shiny black Oldsmobile sedan that really had belonged to a little, old man who only drove it to church . . . until her husband, Ken—who owned a garage—took it on a trade. When generous Alberta bestowed it on Joe, he installed a dashboard plaque informing his passengers that this was a Mafia staff car and you were to “keep-a-you- hands off.” He drove it to college for two years and his only problem with it was the students who approached him wanting to take out contracts on the professors who’d flunked them. Joe has a doctorate in chemistry now and a soul-deep concern for maintaining the environment. No more big sedans for Joe.

John—feeling the first stirrings of manhood—bought a cute little MGB with wheels that looked like the sunburst device of the Plantagenet house of York. His dad gave him the duty lecture about how difficult it is to get parts for a British car—that it really does behoove an insurance man’s family to buy American cars—and climbed behind the wheel himself, his eyes shining with the glow only a man who’s been obliged to drive a station-wagon for twenty-five years could possibly understand. John finally sold it while finishing law school and—after years of being an attorney—earned another doctorate in American history, takes on teaching assignments for vacationing professors as well as writing well-reviewed history books. These days, John walks whenever it is feasible and—conscious of a deep obligation to those who follow—drives an electric car.

Tony, like me, loves old furniture, so his first choice was a battered pick-up truck. On spring clean-up days, I climb up into the passenger seat beside him to cruise the streets in search of discarded, but restorable, furniture. While Tony’s dad refrains from calling our treasures “junk,” he does refer to us as “Sanford and Mom.” Tony now finds beautiful, restorable antiques that he sells in two antique conglomerates.

Our youngest boy, Bill, almost from babyhood, has loved—equally—dogs and the great outdoors. His first car was an old but snazzy Grand Prix which he soon traded in on a little red pick-up truck. Now, a game protector/farmer, Bill breeds Scottish Highland cattle, Yorkshire pigs, Cornish/Rock chickens, and English Setters. The ancient term, “Gentleman Farmer,” might have been invented for our classy but down-to-earth Bill.

And do I believe each of my boys’ first cars influenced their choice of profession?