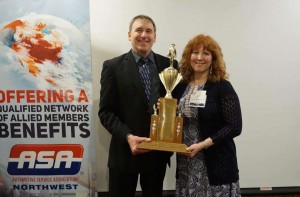 Smith is co-owner of Gig Harbor Auto Repair with her husband, Brian. It is the ASA-Northwest’s highest honor.

“So many folks in and around this association carve precious time from their lives to serve others both within and outside of our industry,” said Jeff Lovell, ASA Northwest president/executive director, in describing qualities determining the award’s recipients. “Their work is seldom noticed by the general population, our association membership. In fact, often they seem to be operating in stealth mode. However, their work is felt by many, they brighten days, they warm hearts, and they lighten the load for others, and take up slack in systems automatically.

Remembering Don Seyfer: A Good Man Who Made a Difference