Oh, the Joy of Being a Technician! 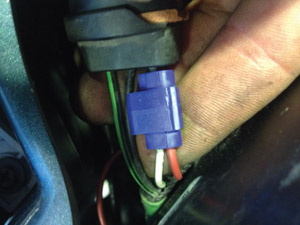 One of the great joys of being an automotive technician is the thrill each day brings. I know: That may be a much too cheerful interpretation of what adventure awaits us with each new repair order, but I try to maintain a positive outlook on life!

One recent adventure involving intermittently inoperative headlamps on a 1996 Ford Explorer had me accessing multiple resources en route to the repair. Our customer reported that both headlamps would go out now and then, often for long periods of time. On occasion, a bump in the road would “jar” them back to life.

Of course, you’ve already guessed that the headlamps were fully functional when I turned them on, but after a test drive, I was able to duplicate the no-headlight concern. 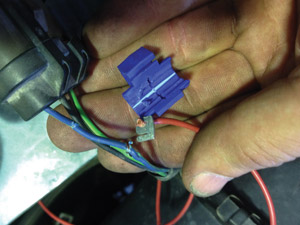 After making several notes of issues I noticed on the test drive not related to lights – but related to an 18-year-old, four-wheel-drive vehicle in Colorado – I popped the hood for a thorough visual inspection, where I discovered the little blue connectors shown in Figure 1 attached to both headlamp socket connectors. 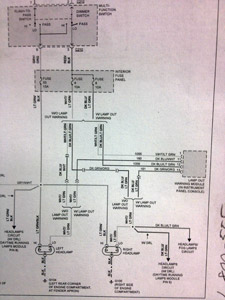 This type of connector carnage makes me cringe, because it is unprofessional and unreliable. Could this be the root cause of our issue? At this point I could not be sure, but I immediately got that feeling (you know the one) that this was somehow related. I did confirm that I was not getting power on the factory wire, just to ensure that my journey hadn’t come to an end.

With the blue splice connectors being the only odd issue I could catch with my visual inspection, I printed the schematic for the headlamp circuit. Testing showed the two main fuses in the power distribution box were fine, and all three related fuses in the interior fuse block were good. Further, I found that the Explorer had high beams at all times, even when the low beams were inoperative. What the heck could cause that? When I further scrutinized my wiring diagram, I saw that the low beam and high beam circuits were fused separately, and when my low beams were inoperative, my interior headlamp fuses were functioning. Well, there was only one culprit remaining, and it was the “Lamp Out” Warning Module. 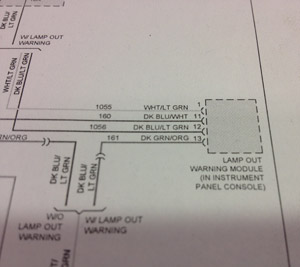 I did some online research and discovered that others had encountered the same issue with Explorers. The International Automotive Technicians Network (iATN) has several posts related to this issue, identifying this Lamp Out Module as the root cause. Actually, two of the posts specifically stated that only the right low beam was inoperative, but the left side worked. Those comments really piqued my curiosity. Figure 5 shows the module removed from under the center console. 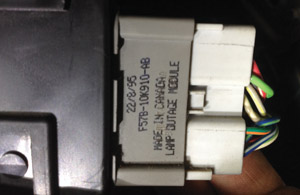 Now, since I’m a guy, and we always follow directions, I just had to call the number on the sticker that was stuck to the side of my little black module (Figure 6). A woman answered the phone, and so I explained that I was holding a Lamp Out Module out of my 1996 Explorer, and the phone number on the side told me to call before replacing. There was a moment of silence, and then she responded “Sir, is this a practical joke?” I continued explaining what I was up to, and why I was calling, and she explained that she was part of a national survey hotline, and she assured me she was not affiliated with Ford. I thanked her and let her go. I can only assume that after almost 20 years the number had been changed. I researched the number, and it actually was an old hotline number for Ford technicians to call when dealing with remote keyless entry issues. 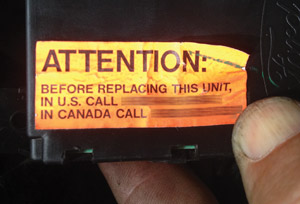 So, what to do now? I called my Ford dealer, and I was not surprised to discover that the module was no longer available. Since I have been in this situation before, I pulled the module apart to reveal its circuit board, in hopes that I’d find a faulty connection (Figure 7).

Bingo! Figure 8 shows exactly which pins had lost their connection to the circuit board. Instead of nice round and sloped solder connections, these seemed burnt and dirty. Before repairing, I plugged the module back in and could turn the light on and off by touching these pins. I resoldered three pins with the smallest iron I had, and the Ford had headlamps once again. 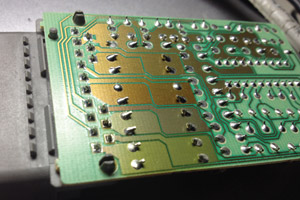 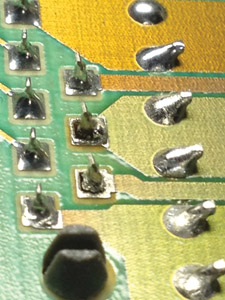 So, what is the correct repair for this Explorer? I did not research any aftermarket sources for this part, and I’d bet it would be a tough one to find. It turns out that the splice connectors in Figure 1 were probably an attempt by a previous owner to turn his lamps back on when they would fail. Certainly this is not the correct fix, or would it be?

They attempted to circumvent the Lamp Out circuit – and simply went about it the wrong way – but the idea is the same. Should I have simply taken this module out of the circuit altogether?