“If this isn’t resolved in the next week or two, the impact will become more and more visible with each passing day,” said one automotive analyst.

By Paul A. Eisenstein/NBC News 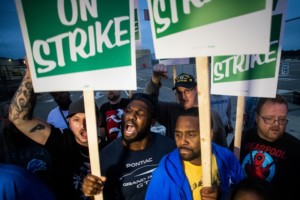 General Motors employees Bobby Caughel, from left, and Flint resident James Crump, shout out as they protest with other GM employees, UAW members and labor supporters outside the Flint Assembly Plant in Michigan on Sept. 16, 2019.Jake May / The Flint Journal via AP (via NBC News)

The ripple effects of the United Automobile Workers Union strike are starting to be felt, with car dealers reporting low inventory on popular models, and repair shops scrambling to find parts for GM vehicles.

They aren’t the only ones feeling the pinch — as the strike by almost 47,000 members of the UAW enters its fifth week, the walkout is costing GM as much as $90 million a day, according to various industry estimates.