Digging a little deeper into the classic Prius 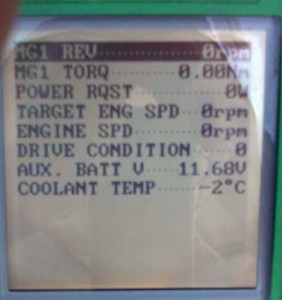 It’s no secret that the Genera­tion 1 Prius is my pick for favorite commuter vehicle. When these cars are properly serviced and running like they should, you just can’t beat them for transportation. They were designed to be the best hybrid vehicle on the market, and there were few cars that could compete with them when they first came out. Toyota put the cars in service in 1997 and had time to work out the bugs and even redesign the high- voltage (HV) battery.

The original Prius battery used the same basic battery cells that the Honda Insight and Civic Hybrids are using. They basically look like a series of D-cell stacks. The newer Panasonic cells were much better performing and last much longer. Toyota introduced the Gen 1 Prius in the United States in 2001. It only sold about 15,600 units in the U.S., but their reputation soon had the people who were following the Green Car idea looking at the technology. Toyota only sold about 56,000 Gen 1 Priuses from 2001 to 2003. The people who bought these cars quickly became loyalists and most are reluctant to let go of their Gen 1s even when replacing them with a newer model. I have heard the statement made many times by different Gen 1 owners that this has been the best car they have ever owned.

By the time they introduced the Gen 2 Prius, there were enough Gen 1 owners speaking highly about the cars that the redesigned Gen 2s took the hybrid market by storm. The Gen 2 Prius introduced in 2004 sold 54,000 units and in 2005 that number nearly doubled. The rest of the car manufacturers began the race to develop hybrids of their own with nearly all of them now offering some version of hybrid vehicle. It is safe to say that hybrids are here to stay, and Toyota has sold nearly 3 million Priuses worldwide as of June 2013.

The Gen 1 Priuses are now all reaching the age and mileage where the original hybrid batteries are starting to let go, forcing their owners to decide whether or not they want to put the kind of money into the cars that their dealer is saying it will take to keep the cars in service. Gen 1 owners are generally offered very little on trade-in value with the dealer. The dealer generally offers only a brand new battery as an option and deducts the repair cost from the trade-in value. Some of these cars are showing up at auctions after their owners decide to donate them to charity. I have picked up a few of them relatively inexpensively needing little more than battery reconditioning. 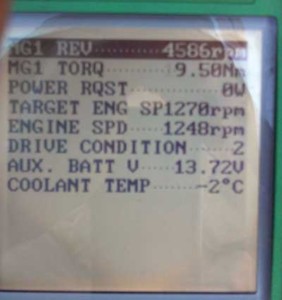 Figure 2 – The MG1 torque is now at 9.5 Nm indicating power usage to spin the engine over at 1,248 rpm. Drive condition 2 is cranking mode, and the engine sounds like it’s idling. It’s hard to tell any difference in the sound of the engine during this starting period, but if you watch MG1 torque, you’ll see that it starts dropping as the engine gets ready to start. The point where MG1 torque goes negative is your indication that the engine started and is now producing power.

Some others I’ve bought were sold as not running. It doesn’t take much misdiagnosing to send these cars on a one-way path to the auto auction. Sometimes the chain of events begins with a simple oil change. A day or two later the car gets towed to a repair shop as a no-start. The technician, thinking that he hears the engine start, runs it for a bit then stall, starts chasing his tail until the hybrid battery becomes too weak to spin the engine over. Since there aren’t many recharge options for the hybrid battery, this becomes a serious situation often ending in the car being towed to the dealer, traded in and then sent to the auction. It’s gotten to the point that I would say at least one third of Priuses that are not running and are towed to my shop get here because they are overfilled with oil.

There are lots of data and Internet blogs with documentation and even You Tube videos explaining the causes and repair options for the all-too-common no-start codes P3101 and P3191 that occur on these vehicles. These codes are associated with multiple causes, which include but aren’t limited to, any of the things that can keep a normal gas engine from starting such as out of fuel condition, low fuel pressure, ignition coils misfiring, crank sensor signal missing, mass air flow signal problems, engine mechanical condition etc. Then there are other problems inherent with these particular vehicles that can keep the engine from starting. Probably the most common issues that cause problems on these cars are created by technician error. These cars require 3.9 quarts of oil during an oil change with a filter. Four quarts is too much oil.

There is a factory bulletin regarding a P3191/P3101 no-start condition that ends in a new fuel tank, circuit opening relay and a new powertrain control module (PCM). Several vehicles I have encountered have had this barrage of components replaced more than once. Some had the oil changed at the dealer and left overfull. I have one customer who keeps getting free oil change coupons from the dealer, and each time he warns them of the overfilling problem, they still continue to overfill his car.

I had a car in last month that came to us as a referral with the P3191 and P3101 codes. The owner wanted a second opinion. Her dealer told her she needed a fuel tank and computer. The estimate she was given had her trying to decide whether or not to keep the car. She bought it new and has had no problem for 11 years. The past two years it’s been hard to start in cold weather. She showed me the estimate she got from the dealer. I noticed she had just gotten the oil changed by them … and was charged for six quarts of oil. I showed her the level on the stick and explained what needed to be done, which she agreed to do. 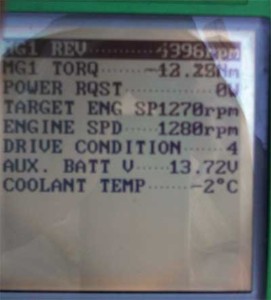 Figure 3 – The torque for MG1 is now reading -12.2 Nm and the drive condition transitions to 4. Here you can also see that the engine speed is slightly higher than the target engine speed. During cranking the opposite is true. This information becomes more critical as the SOC (State of Charge) of the hybrid battery drops. If you are starting with an SOC of near 20 percent, you may only get one or two chances at cranking the engine before the HV controller locks you out. Hint: I have run the cars off of carb cleaner watching MG 1 torque stay negative until the HV battery comes up enough to do some further tests.

I took a look with the scan tool at the freeze-frame data in the HV module for the P3101 code and saw that the info code was a 205. The engine coolant temp showed -5 deg Celsius. MG1 torque request = 0 kw. The exclusive info # 3 for the sub code 205 was 0. The TSB for these codes is looking for a 1 in the exclusive info # 3 position showing that the computer is seeing an out-of-fuel condition. The fuel tank baffle deflects under certain temperature conditions and holds the fuel inlet line up out of the fuel allowing the pump to starve. This was a problem for certain fuel tanks from the time they were made. This car has been operating in the same environment since it was new and the faulty fuel tank issue should have shown up and been taken care of before now if it were an issue.

We proceeded to drain the excess oil and pulled the throttle body off of the intake and cleaned it along with the mass air flow sensor. We then cleaned the oil puddle out of the surge tank (intake) and reassembled the car. We have been keeping in touch this week as I have been with several other customers who have had this issue since we have been experiencing temps in the teens at night all week. So far they have all been fine.

The test that I use to see how well the engine is starting begins with setting the Mastertech up in HV user data to capture MG1 torque, revolutions, drive condition, and engine speed while trying to start the engine.

I turned the key to start and start taking pictures of the data frames.