Do people actually buy giant car bows like the ones in TV commercials? 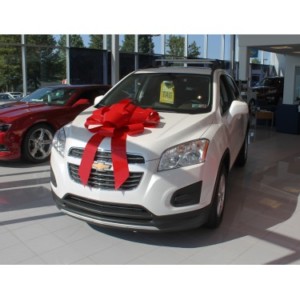 Car Bow Store is a family-owned company headquartered in Warminster, PA that has built a business of manufacturing big bows. Founded in 2009, Car Bow Store sells mostly to car manufacturers and dealerships that use them as a marketing tool during the Holiday Season.

“December is one of the busiest months of the year for car sales, especially luxury vehicles,”  said Michael Rudolph, president of Car Bow Store. “Car manufacturers are looking to close out the year on a strong note and finalize the fourth quarter sales numbers.”

The combination of these factors and holiday promotional deals make December one of the best times to purchase a new vehicle – it is no wonder that many car dealerships will throw-in a car bow for free to seal the deal!

“People love the feeling of opening a gift-wrapped present,” Rudolph said. “Because it is nearly impossible to wrap a car and some other large gifts, a big bow is the best way to top it off.”

Car Bow Store sees the largest spike in the sales of car bows during the holiday season; however, the bows are also popular all year round to top off birthday and graduation gifts. The company has recently observed increased interest in big bows across a variety of industries, especially the Real Estate Industry.

“Many real estate developers and real estate agents across the country are now using our bows on the front doors of recently sold homes to create a memorable and picture perfect experience for home buyers,” Rudolph said. “We have also had interest in our bows among advertising agencies, television & movie production companies, golf tournaments, mall giveaways, and much more!”