Armed with smartphones, Google and Amazon.com, customers are repairing their own rides.

Sometimes, experience-based information systems can help diagnose a vehicle. I said sometimes because these systems can lead a technician down the wrong diagnostic path. As independent repair professionals, we have an array of information systems to choose from – OEM to aftermarket – but we need the most effective repair path.
Lately, I’ve been trying to teach some techs of Generation Z – the post-millennials – the proper diagnostic path in certain situations. Born starting in the early ’90s through the early 2000s, the Gen Zers just love to try solving many of life’s problems with Google or YouTube.
How many customers have pre-diagnosed their own car by using the power of the Web? For Web-savvy car owners, the Internet is an experienced-based information warehouse powered by our collective human experience.

I’ve profiled a few cars here, along with their path to repair, to highlight how helpful – or not – some free information can be. Chris Chesney, in his recent AutoInc. column “Bugs in the System” (see July/August 2015 issue), hit the nail on the head when he said that we need to examine best practices for using service information in our shops. 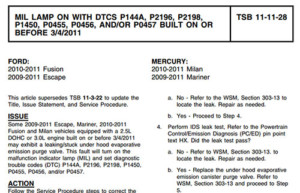 2010 Ford Fusion SEL 2.5L, 16V
My customer stated: “the check engine light is on, and it feels like it idles rough and wants to die.” And, “I took it to X Auto Parts to have it scanned, and they said it’s an emission-system problem.”
Googling this issue revealed one possible variable camshaft timing solenoid issue and two potential problems with the Easy Fuel capless filler neck.

I confirmed the check engine light and pulled a P144A trouble code. I referenced my experienced-based information, and the first of five most common searches showed my P144A code with: “Engine runs rough intermittently and the check engine light is on. The powertrain control module setting Keep Alive Memory code P144A.” Clicking there revealed that defective canister purge solenoid was the posted fix for this code by a 10-to-1 margin over the second-place fix. This site even had a link to the Ford factory bulletin (Figure 1) for this issue:

After testing the valve (Figure 2), I found it was not sealing completely, allowing flow at all times. Are you aware of any of your customers who Googled their way to a similar repair? I have had acquaintances tell me that they’ve found a free fix for these capless systems and successfully cleaned it as the final fix.
My Gen Zers would find the replacement procedure for the purge valve on YouTube, instead of pulling the paper procedure. 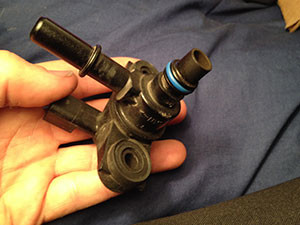 2005 Nissan Altima, 2.5L
One customer said, “The car has been stalling at stoplights, but finally died and won’t restart.” He brought in a slip of paper that indicated Y Auto Parts had scanned his vehicle and found P0335.
Googling this car and code revealed an overwhelming number of hits pointing to a defective crankshaft position (CKP) sensor. My customer also told me this, along with the fact that he had replaced the crankshaft sensor and the camshaft sensor because, “They mentioned the camshaft sensor could be bad.”

I pulled code P0335, and the engine did not start. A quick check in my information system revealed the same amount of evidence pointing to a defective CKP sensor. However, my ears told me the engine didn’t sound right while cranking. A quick compression test revealed low compression in all cylinders. The cause was a jumped timing chain. 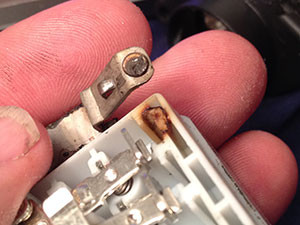 1995 Pontiac Grand Am, 156K miles
My customer’s concern was “intermittent no-start,” but this Grand Am started every time for me. A quick Google check and my experience-based information system revealed no glaring hits for an intermittent no-start with no codes, and this came as no surprise.

However, I attempted to start the Grand Am, and it cranked but did not start. Checking for spark and injector trigger revealed none, along with fuel pressure. Then, I was able to begin locating the proper diagnostic routine in “Ignition System: No Start – Engine Cranks OK.”

I was directed to test the fuel pump/ignition fuse, which had no power. The wiring schematic led me to this fuse (Figure 3), the pink one coming from the ignition switch. Disassembling the column allowed me to verify that there was no power to this wire, as pictured here:

So, what do we take away from these case studies? The power of collective human experience is spot-on at times but not at others. The trick is to find the right balance between using factory procedures and experience-based information to research and expedite repairs. We must all – as Chris Chesney put it – examine best practices for using service information.