In Colorado – and elsewhere, I’m certain – P0442 codes can be counted on to bring cars into our service drives. But in Denver and other heavily populated, pollution-producing areas in the state, we have an additional layer of inspection that forces vehicle owners to have their evaporative emissions systems inspected. 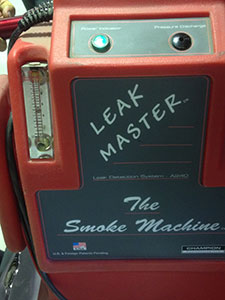 If it weren’t for such “persuasion,” owners might otherwise drive around with their malfunction indicator light (MIL) “ON” and ignore the situation altogether. But here, when a vehicle fails the inspection and maintenance (I/M) 240 enhanced emission inspection test, owners cannot register it until it passes.

One customer came to us with her MIL illuminated and a P0445 code in the memory. A quick check of our information system revealed several possible causes, including a loose gas cap, the leak detection pump (LDP), the purge solenoid, the rubber evaporative hoses and the vent valve.

A quick check found that the gas cap was tight, but then it had been checked before the vehicle left the (I/M) 240 lane, where the first test was administered. So following the diagnostic chart for the “small leak” code, I was soon retrieving my smoke machine from our shop’s tool room and reading up on how to prepare this truck for a leak test (Figure 1). 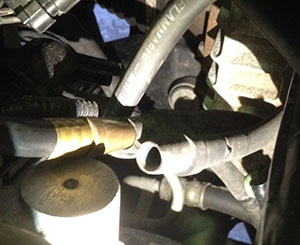 After blocking the vent hose of the evaporative canister, my crew and I introduced smoke into the evaporative system (Figure 2). While carefully inspecting all the fittings, lines and components for signs of leaking smoke, we discovered small amounts of smoke near one of the fittings at the leak detection pump. Figure 3 shows the condition of the hose after we had removed it, and we found several other hoses with the same telltale cracks (Figure 3).

We replaced four cracked hoses, and we cleared the code and sent the car home with its owner. Our customer returned to the (I/M) 240 inspection station and passed the test.
The preceding case study was straightforward. Cracked evaporative emission control system (EVAP) hoses are common, and we’ve seen plenty of them. They definitely cause vehicles to fail the (I/M) 240 test. But, as technicians, how should we determine when we’ve actually completed our search for the root cause of a P0442 code? 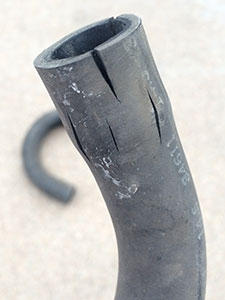 This SUV came in with both P0442 and P0455 codes stored in memory. We’re quite familiar with these trouble codes because both share the same chart. And this Durango seemed to have the same diagnostic routine as the Sebring.

Performing the same test with our smoke machine revealed leaks at two hoses attached to the EVAP canister near the fuel tank (Figure 4). We replaced the leaking hoses with new ones and sent our customer back for a retest at the (I/M) 240 test center.

However, the Durango returned a few days later with the MIL illuminated again. This time, though, the only one in memory was the P0455 code. As we moved through the test procedure, the chart told us to apply an external vacuum to the LDP first.

Using our scan tool, we then closed the LDP seal to the atmosphere and injected smoke into the EVAP system using our smoke machine. We observed the LDP filter port for smoke, and, sure enough, it was leaking. Replacing the LDP and the hoses finally sealed up the EVAP system in the vehicle. 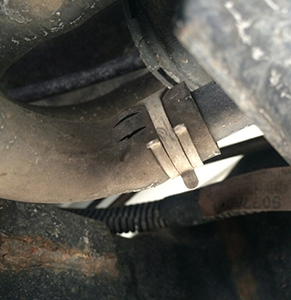 Was there a way we could have avoided a comeback on this car? Admittedly, we did jump to conclusions. We accepted the obvious leaks and didn’t scrutinize it further. Investigation into pattern-case failures for Durangos revealed that EVAP hoses, LDPs and fuel-cap tightening account for three of the top four reported failures.

Our conclusion: We should have given more credence to that data and pushed deeper for additional failed components before releasing the vehicle the first time.

We’ve all had customers come into our shops with an issue unrelated to the MIL and directed us to “ignore it for now” or “fix that later.” But we work in an emissions-inspection state where drivers are forced to have their MIL diagnosed and repaired when they otherwise might ignore it.

In cases like those, then, the conversation often turns to how much it will cost to repair the vehicle to pass the test and allow customers to register their vehicles. Around these parts, the cause of the MIL being “ON” must be diagnosed and repaired. 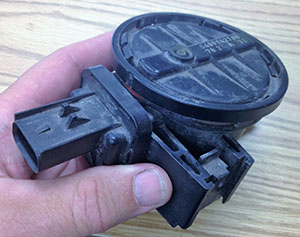