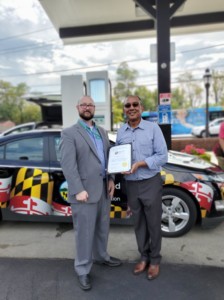 With all of the focus on electric cars and building out a more-robust charging infrastructure in the US, you’d think that there would have been some old gas stations repurposed into EV charging stations. Well, until very recently you’d have been wrong.

It turns out that while that might seem like a total no-brainer of an idea, nobody had acted on it until Depeswar Doley made the switch this summer at his gas station in Takoma Park, Maryland, according to a report published Thursday by CNBC.

His station, RS Automotives, has been around since the late 1950s, but it was just this year that he began to question the way that gasoline companies do business and looked at reevaluating his business model. He wasn’t totally convinced that swapping his pumps for chargers would be the way forward until his daughter pushed him over the edge.