Q: Greg do you remember the gas stations from the 1950s and 1960s and how they got you to stop in more? There were many promotions that went well beyond the usual S&H Green Stamps most stations offered. And I think these gimmicks worked. Thanks for your nostalgic columns.
Al K., Illinois 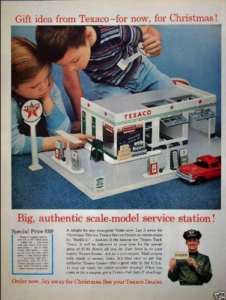 A: Yes I do, Al. Back then, full-service gas stations engaged in numerous marketing ploys to draw you in for fill ups. Unlike today’s gas station stores that are mostly eateries, the old-time gas station was a real service center offering specialized auto repair, tires, oil, batteries and more. The only things in common with today’s gas stations were restrooms and, at best, a small selection of gum, candy bars, crackers and potato chips. Other than that, it was servicing your car and selling gasoline as the primary business plan.

Since most gas stations offered the same level of service, it took different promotions to get you into their station and most important making sure you came back for more.

I remember Texaco offered a Buddy L service station that was available only from your local Texaco dealer for $3.50. This beautiful scale model included everything needed for one of the better holiday gifts of the era. A little later in the 60s, it was the Texaco Fire Chief helmet with a speaker that was a hot ticket for youngsters and a ploy that urged parents to stop at a Texaco Station.

Over at Sunoco, its popular cash game increased traffic and was very popular during its duration. Every time you would buy gas, you would receive a Sunoco Bucks money play card the featured one-half of dollar denominations. You needed to match the other side to win, necessitating another stop. The low denomination prizes were frequent, but no one in my family won any big money. 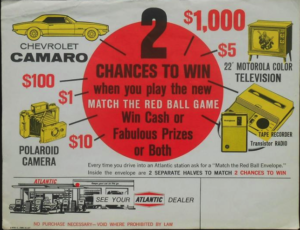 Shell’s “Mr. President Coins” game was a hit, even though the company had to stop it mid-flight as there were some unsavory “dealer or gas pumper acquaintances” claiming prizes unfairly. The first batch of coins could be identified prior to opening, so Shell recalled the coins and started over with a new coin that was tamper proof. Prizes of up to $5,000 and instant winners from $1 to $1,000 made for a popular reason to stop by a Shell dealer. The instant $1,000 winner went to the holder of any James Madison coin, but the most popular instant winner was the Chester A. Arthur $1 coin. This game was only promoted in certain areas of the country.

Atlantic had a card game called “Play Ball,” and similar to the Shell President’s game it was baseball that took center stage. A total of 50 players were included, and prizes ranged from $1 to $2,500 based on collecting either two or three group cards in a cash prize category. There were also Instant Winner cards, too, with the $1 and $5 denominations most frequent. Another popular Atlantic game of the later 1960s was “Match the Red Ball”, where you could win cash, a Chevy Camaro or other prizes. It was similar to Sunoco’s Sunny Dollars as you had to match two sides of the game pieces. 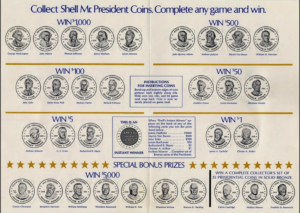 Hess Stations offered its official Hess Trucks every Thanksgiving starting in 1964. To my surprise, Hess stopped selling the trucks at the Hess Stations a few years ago and they are now available online only. I’m not sure why Hess stopped the yearly offering at their stations, but I’ll bet 10 to 1 that gas sales during the Thanksgiving holiday have dropped substantially as you can’t fill up by mail order.

Baby boomers might recall that well before Visa and MasterCard, it was the gasoline credit cards that arrived first. Gulf was the first company that offered me a credit card in 1969 following my early community college days and induction into the U.S. Army National Guard. I took them up on it, as I did Shell, too.

Gone is a staple product that gas stations offered to assist motorists and make them stop in for fill ups. I’m talking about all those large, full color, fold-out, state and U.S. road maps, which were usually free of charge at your area gas station. However, you won’t find many available anymore thanks to navigation provided by smartphones, Garmin and other built-in-car systems. Many people collect them these days and I still have several myself. 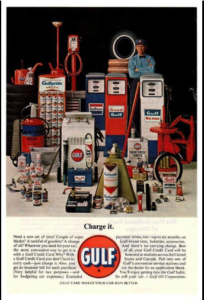 Sinclair was another company that did some big promotions. Back in the 1960s, Sinclair promoted five $25,000 grand prize winners along with weekly winners of up to $5,000 nationwide in its Sinclair Sweepstakes promo. Customers could win other prizes like televisions and radios, but everyone had their eyes on the big money. The promotion was highly successful for Sinclair dealers as all you had to do was fill out the official Sinclair entry blank and mail it in. Considering this promotion took place in 1960, that $25,000 was really huge money.

Today, Texaco and Hess still offer yearly trucks and cars which are still popular for kids and collectors. But the era of the unique promotions, games, and other ploys have disappeared along with the gas stations we knew back then. 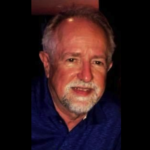 Greg Zyla is a syndicated automotive columnist and his work appears regularly in newspapers and magazines. Please see his homepage at gregzyla.com for more of his work including test drives, magazine interviews auto nostalgia articles and much more.