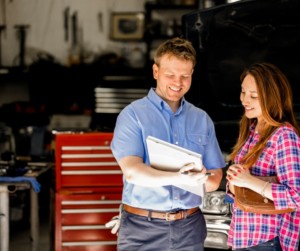 I’ve been experimenting with specials to be used in direct mail, boosted Facebook posts and other such advertising mediums.

We recently had a car come in requesting this special. The owner of the car signed and approved the total amount for the job. No problem so far. We went ahead and performed the service, noting a hole worn through a pipe because the pipe was rubbing against the hood latch due to a previous improper repair. We made our recommendations, which were declined. OK, fair enough, not every recommendation is bought.

Here is where it got interesting. The client then emailed us, expressing that he was only willing to pay around $80, based on the repair order as it was written, which itemized 30 ounces of refrigerant as a line item. We itemized it that way because California requires parts to be itemized, so I thought I would itemize it up front – in the name of transparency. Of course, we did not use the refrigerant because there was a hole in a pipe, so clearly a recharge was not possible.

My intent with the package was for the $139 charge to stand, whether the system was recharged or not. After explaining this to the customer, he still insisted on the reduced rate. Upon reflection, I chose to honor his request. I consider the $60-plus difference to be an educational fee that I paid for learning that I need to be more careful with wording on my repair orders. I have since changed the wording to not itemize the refrigerant and sealer detector until we finalize it on an invoice, only showing actual parts used on the final invoice, not the estimate. We will later itemize the parts and labor once the job is finished.

My point in sharing this recent experience is to impress upon you the importance of being very literal with everything you write on the repair order. I should have had a job description showing the intent of the package and not itemizing specific parts used. If I have a signature for $139, only showing a labor operation, I can later change the labor to be less and the parts to be more, so long as the total is still what I quoted, and the scope of the labor description has not changed.

With the way I wrote it, I was obligated to remove the parts not used and keep the labor charge as it was on the estimate. Lesson learned.