Shops Still Shy Away from Working on Hybrids

Troubleshooting hybrids takes knowledge and a great deal of hands-on experience, yet the payoff is worth it

It’s been a busy time for hybrids in my shop. The training schedule has been hectic and the buying and selling is starting to get some movement. The Consumer Reports rating on the Prius as the best value in used cars sure hasn’t hurt either.

I’m getting a lot of referrals from other hybrid customers, plus the regular shops I deal with are – for the most part – still skeptical about working on high-voltage (HV) systems. I have had calls from customers who have been getting free oil change coupons from dealers. One in particular has had his car towed several times after getting his free oil change. The overfull no start code pops up each time: P3191 and P3101. This usually requires about a half quart of oil removal along with some intake and mass air flow (MAF) sensor cleaning. I’ve had others that weren’t so lucky.

One fellow in particular emailed me after reading about this problem in AutoInc. He had an oil change at a large Toyota dealer and couldn’t get out the door before the hybrid warning light came on and his car stalled. He went through a lot of grief and expense only to discover four days later that the dealership had overfilled his car by two quarts of oil. With these cars cranking at 1100 rpm, even the most experienced of technicians are fooled into thinking that a cranking vehicle is running.

Therefore, each time they hit the start button they are taking a little more charge out of the HV battery and they get a little bit closer to the point of no return on the state of charge (SOC). Once that HV battery gets below 20 percent SOC, it won’t allow you to crank the car again. And then there’s the dilemma … what do you do with a dead, high-voltage battery?

It’s important to check the SOC of the HV battery before attempting to crank or start the vehicle. Many times I have seen the no-start codes or no-power from the internal combustion engine (ICE) codes with an SOC in the 20-something percent range. This scenario gives you maybe a crank or two before you get locked out and have to deal with the low SOC HV battery.

When this is the case I do the no-start routine (NSR) where you drain some oil, clean the MAF, clean the intake and throttle body before attempting a start. If the battery has already been cranked down below the 20 percent SOC, you can bring it back to a usable SOC, but you have to take it out and charge the cells individually or in pairs.

Another common code we see on these hybrids is what’s commonly referred to as “the Inverter Code” P3125. But without the three-digit info code, unknowing technicians often jump right to the inverter and replace it when, in fact, it’s seldom the problem.

I just repaired a Highlander that was diagnosed by a dealer as needing a new hybrid motor generator, inverter and radiator due to an inverter P3125 with a subcode for overheating. He was given a $9,000 estimate. He needed an HV water pump. I have two Priuses on the lot right now with the same issue … both were diagnosed as bad HV inverters and HV ECUs. They had the P3125 inverter code, but the HV water pump will fix them both. (One of the cars had had three inverters already.)

A 2007 Prius was in a couple of weeks ago from a body shop with a no-start code popping up after he drove for a block or so. He sent it to the dealer to get the fluids changed and got it back with the same code and was told that his HV battery needed to be replaced. He pulled the battery and brought it to me. I took it apart and tested each cell and cleaned all the terminals. The cells were all fine.

I had him bring the car to me after he reinstalled the battery. My initial inspection revealed the typical half-quart-too-much oil, which I drained and then did a road test. The car was now back to running half a block before setting the code.

The best way I know to test the cranking or running condition of one of these cars is to use a scope and current probe. I connect to one of the DC HV cables and watch the current direction.

Less than two seconds later, the current reverses and goes back into the battery as the gas engine starts and MG1 is now charging the HV battery. This is a normal, good-starting Gen 1 Prius pattern.

There are plenty of hybrid cars out there running with too much oil in them, but not setting codes or failing to start due to the fact that the weather is warm. As soon as the temperature drops below 40 F, these cars will start to become troublesome. There are some that are setting the codes intermittently, but still manage to start most of the time – but barely. You can see these scenarios with the current probe. 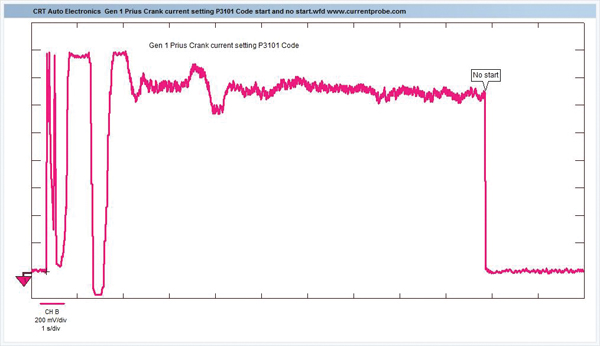 In Figure 2, this Prius is cranking at 1200 rpms and sounds like it’s running for 10 seconds. Looking at the waveform, though, you can see that the current is going the same direction the whole 10 seconds – meaning that MG1 is using the current to crank the gas engine.

This is by far the easiest way to tell what’s going on with the crank/start situation. You can also use a scan tool and watch MG1 torque. When cranking begins, MG1 shows positive torque. When the torque switches to negative, the gas engine is running and producing energy with MG1.

Without knowing which way the current is flowing from MG1, it’s almost impossible to tell whether the engine is cranking or running.

Misdiagnosis is probably the biggest thing that currently plagues hybrids. They are, in my opinion, the best vehicles ever designed. When properly serviced they are reliable, inexpensive to operate, safe, comfortable to drive and hold their resale value. They have also some of the most intelligent and loyal owners I’ve ever dealt with. Most of the hybrids we see come from referrals as we have yet to advertise that we service them.

The other big issue we deal with is the HV battery. People are used to thinking of a hybrid battery as being an astronomical number of $6,000 to $8,000. I don’t know where these numbers come from, but they are far from reality.

Batteries are getting less and less expensive with rebuilds selling for the most part at under $1,700 with a three-year warranty. It’s hard to justify rebuilding them anymore. New Prius batteries are selling for under $2,000 dollars.

The batteries have scan tool parameters that make them easy to test and determine how much useful life they have left. It’s fun having them to work on and taking them on has proven to be one of the best decisions I have ever made.