Ford Motor Co. saw the light in hybrid technology with the introduction of the model year (M/Y) 2005 Escape hybrid. Since then, they’ve made many improvements and gained market share. 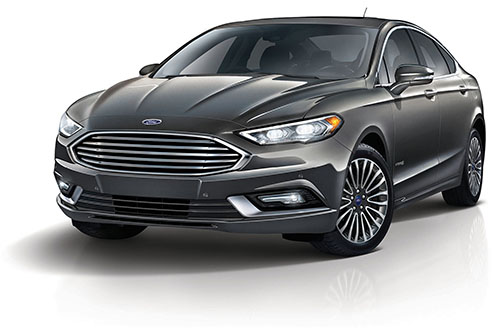 Fleets fell in love, as the Ford hybrids are reliable, fuel efficient and roomy. Bill Ford Jr. was CEO then and publically promoted hybrids, so they were well funded. During the development phase of the Escape, 1999 to 2004, Bill was often criticized in Detroit about his concern about greenhouse gasses. After Boeing’s Alan Mulally was made CEO, hybrids, plug-ins and electric cars were put on the front burner and the heat was turned up.

More electric cars are coming from Ford over the next few years because they have become a leader in America. This time we look at the 2017 Fusion Hybrid and compare it to the 2010 Fusion Hybrid electric vehicle (HEV).

As a reminder, I use a technician’s point of view on model introductions. AutoInc. gives the car companies a report card on the access they provide a working tech to fix and maintain their latest offerings. We compare the older version to the newest one. Full disclosure: my organization, the Automotive Career Development Center (ACDC), has two Ford Escape Hybrids and promotes Ford HEVs at class, but I will be unbiased in my review.

What is the Ford Fusion Energi?

Most techs know what a hybrid is, but plug-in hybrids are relatively new. Ford introduced two in M/Y 2013 as a Fusion and a C-Max. To make a plug-in out of a typical hybrid, Ford added a larger capacity battery pack, an onboard charger, an expensive extension cord to plug the car into a wall socket, a cabin heater that works without running the internal combustion engine (ICE) and accessories such as heated seats, heated steering wheel, additional dash displays, navigation to help find a charging station and other helpful items.

For those people who make short trips, the real benefits the plug-in can offer, when driving electric, are less global-warming gasses, energy independence and money savings. Take your pick, as zero oil helps all of these issues.

If you’re not familiar with the Escape’s electronically controlled constantly variable transmission (eCVT), it has two electric motors connected to a planetary gear set with the smaller three-phase motor, known as the “starter motor,” spinning the sun gear in either direction and a much larger motor (Ford calls it a “traction motor”) directly geared to the ring gear. The ring gear drives the differential through a gear reduction set and onto the front wheels.

Spinning the larger traction motor in reverse moves the vehicle backward. The planet carrier is always connected to the four-cylinder engine and spins in only one direction. If this sounds familiar, it’s the same design principal as a Prius.

The improvement in the first Fusion was a boost converter located in the eCVT that supplied 400 volts (DC) when more power to the front wheels was required. This also allowed a smaller and lighter high-voltage battery pack. The second-generation Fusion moved many parts out of the eCVT to a separate box located on top of the transmission.

The original Fusion Hybrid and its twin, the Mercury Milan Hybrid, were the first vehicles to use Ford’s second-generation hybrid system. The military bought them by the hundreds, and they are used on bases around the world to cut down on oil use. You don’t need a Humvee to go to a meeting on a military base.

The 2.5-liter engine shuts itself off twice as often as in the earlier Escape because the electric system provides more power. In addition, new control logic for the regenerative brakes recaptures more braking energy than before to store in the high-voltage battery. The regenerative brakes also have a much better feel.

Recalls with the first-generation Fusion Hybrid – seat issues, floor mats and some lug nuts – were fixed, but there weren’t many issues, and they were repaired early on. ACDC does training for the military, and the military has many first-generation Fusion hybrids as mentioned before. These cars are well built, and the problems that do come up are well documented and not hybrid-driveline related.

Some air conditioning issues, electric power steering and idle issues can occur as they age, so refer to online information systems for help. ACDC also provides tech support on hybrid technology for our member shops.

All in all, the Fusion Hybrid sold well, introduced many to hybrid technology and helped Ford develop more advanced systems.

When you look at a 2017 Fusion HEV, you’ll have to examine it closely to detect the differences from the M/Y 2013. Inside, a new gear-selector commands the powertrain control module (PCM) and the transmission control module (TCM) to use different software settings for controlling the automatic transmission and ICE. This rotating wheel is between the seats, and it adds a “cool” factor as you shift from park to reverse, neutral to drive. Look under the hood, and the eCVT looks like the 2013, as the driveline has evolved but not changed much.

On conventional cars, we have seen powertrain components move around the vehicle like PCMs. First, it’s under the dash, then under the seat and it may end up under the hood. The inverter, a device that each high-voltage electric motor needs to operate, was first located in the upper portion of the eCVT of the original Fusion. A poor place if it needs work or replacement.

On the M/Y 2013 Fusion HEV, the inverters were moved out of the eCVT to a separate box located above the transmission with exposed high-voltage, three-phase cables that allowed for less-expensive repairs and less time-consuming diagnostics – more like the Toyota hybrid design.

The second-generation Ford Fusion Hybrid has been upgraded in every area. The 118-hp electric traction motor helps the four-cylinder 141-hp, 2.0-liter late intake valve closing (LIVC), mistakenly called an Atkinson-cycle, provides a fuel-efficient drive system. Electric-only operation mathematically can propel the Fusion at speeds up to 85 mph, but in reality, this almost never happens. The gas engine starts often during typical acceleration, but the ICE can stay off in certain low-speed traffic situations if you try.

R1234yf is now used in the A/C system. The 1.4-kWh lithium-ion battery pack (on the hybrid version) feeds the inverters that send power to the electric motors, and the pack is recharged by the engine-driven generator and during braking. A second hybrid version, the plug-in Energi model, offers a bigger, 7.6-kWh battery pack that enables 19 miles of all-electric range for those who want a zero-emissions car for short drives.

A big change was the chemistry in the high-voltage battery cells. Nickel was out; Lithium was in. This is a big improvement and, so far, has been trouble free.

Ford has gone through a transformation since the bailout (they did not need any government help), and all its cars and trucks are better than before. No cars are perfect, so technicians have a lifetime job. The newer Fusion is a better car than before and serviceability has improved, so “have you fixed a new Ford lately?” If you have, you may agree that things are getting better.

Craig Van Batenburg, AAM, is a master hybrid technician. He is the owner of the Automotive Career Development Center (ACDC), which he founded in 1998. He develops technical classes for those who require updating their knowledge in hybrid and electric cars. You can reach him at craig@auto-careers.org.
Ford Fusion Chart