As more plug-in cars hit the streets, will they be a hit or a miss with technicians?

At the New York City Auto Show in March, I had a great meeting with some BMW people. They’re proud and committed to their plug-in hybrid electric vehicle (PHEV) systems. The question is, when you add a plug-in, high-voltage system to an existing car what happens to the serviceability?

Awhile back, I compared a 2005 BMW 325 2.5 liter to the updated 2011 model in AutoInc., and guess what? The newer one was harder to service. So the questions I ask working techs include: Do the automotive designers look at the ease of service when designing a new car? And are they getting better or worse to work on?

Looks like I will be reporting for a while longer.

BMW, founded in 1916, is short for Bavarian Motor Works. Today, BMW is selling well and moving into the future with no more hybrid models. If a BMW is equipped with a high-voltage battery, it can be plugged into the wall. We will compare the 2018 530e plug-in hybrid to the 2018 530i non-hybrid.

The 2018 BMW 530e plug-in hybrid is nearly identical to the gas versions of the 5-Series. The plug-in is distinguished from the rest of the 5-Series lineup by the charging-port door on the left front fender. On the inside, drivers will find an eDrive button next to the gear selector and slightly different graphics on the digital instrument display. Open the hood, though, and it’s another story. You’ll see lots of orange cables.

The 530e uses BMW’s eDrive system, combining a turbocharged, direct-injected 2.0-liter inline-four with an electric motor and a 9.2-kWh lithium-ion battery pack. All the new BMW plug-in hybrids have a gas and electric propulsion system that’s almost the same, except for the size of the HV battery pack. The heavier the car, the more kilowatts.

The 530e is rated for a combined output of 248hp and 310-pound feet of torque. It uses an eight-speed automatic transmission with the electric motor in the same place as a torque converter. BMW claims a zero-to-60 mph time of 6.0 seconds for the rear-wheel-drive 530e, and 5.8 seconds for the xDrive, all-wheel-drive, model. This level of acceleration matches the standard, gas-powered 530i.

The hybrid’s battery pack is positioned low and to the rear, providing a weight distribution that improves on other gas-only 5-Series cars. The 9.6-kWh lithium pack can go 16 miles in all-electric driving.

The high-voltage battery pack reduces the cargo volume from 19 cubic feet in gas versions to 15 cubic feet in the plug-in hybrid. The gas tank is also smaller, at eight gallons compared to 12.

In 2018, BMW added wireless inductive charging as an option, so all you need to do is park your car on the marks in your garage, and it will recharge automatically without having to plug it in.

If you do plug it in, the charge times when fully depleated are about 3.5 hours from a 240 volt (level II) charging station to fully replenish the 9.2 kWh battery pack. If you have an older level II electric vehicle supply equipment (EVSE), you may need to upgrade because the onboard charger needs at least 40 amps to produce the faster charging times. 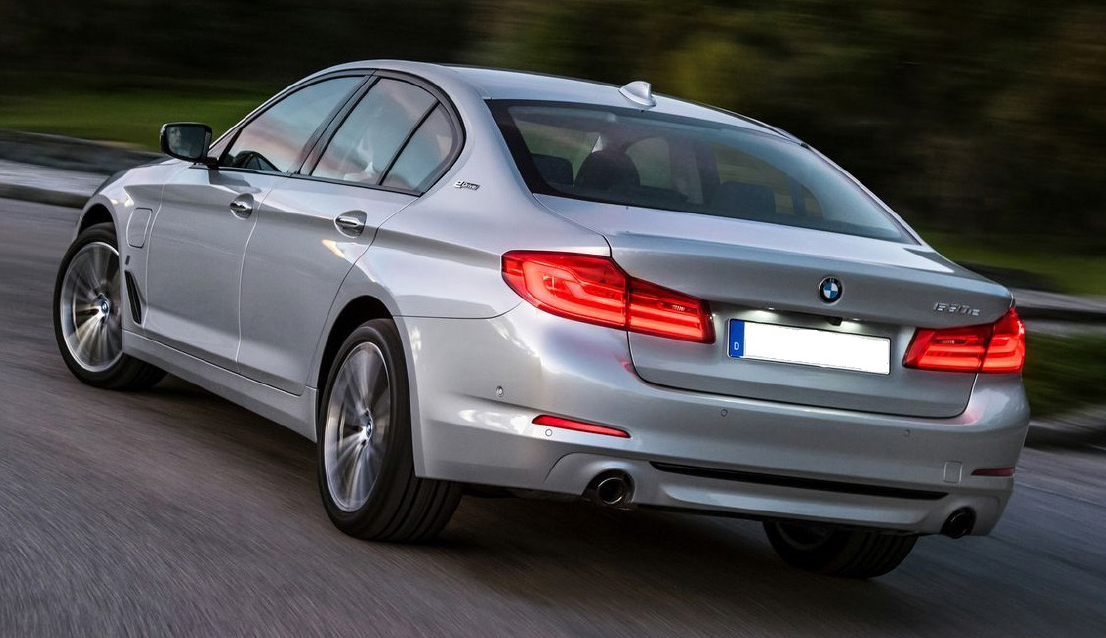 The 12-volt battery near the right taillight is called the “auxiliary battery.” This battery is not for getting the car into Ready mode, but it supplies backup power for the electric power steering. Where you would normally find a spare tire, there is a second 12-volt battery that you must power up if the car has died. The 530e uses run-flat tires, so there is no spare tire or jack. BMW allows 50 miles of safe driving on a “flat tire.”

Overall, the idea was to build a new 530 that could be a plug-in or use conventional internal combustion. If you look closely at the placement of the high-voltage parts, you’ll see a tradeoff. They’re scattered everywhere they found space.

The miles per gallon rating is 24 in the city and 34 at legal speeds on the highway, which is why BMW chose a small 2.0-liter gas engine. When you’re servicing this car, or the PHEV version, the service is very similar. Make sure the fluids are BMW brand or the equivalent. Pay attention to the details. Even simple things like tire pressure matter. What we discovered about these two models is how similar they are.

Most of my articles compare a newer version of an older model. When any manufacturer designs a new model to be both gas, or a plug-in, the gas model will be easier to work on if they have the same ICE. It only gets easier when you work on a pure electric car.

530e Pros: This is an easy car to service for a BMW technician. In general, many American techs are afraid of European cars, but if you work on Euro makes, this is like any other car with the proper scan tool and lots of patience. Make sure you’re well trained on high-voltage systems and hybrid components before digging into any hybrid or plug-in. One tip is to charge the HV battery while it is in for service. And look for an EVSE (charge cord) in the trunk or buy one for the shop.

Cons: If you are not familiar with these cars, you are losing business.

530i Pros: Same car, but the gasoline version. It’s too early to know if this car will be easier to work on than the 530e, but logic says it will. BMW told me they were both designed with service in mind, and a well-trained tech will find that to be true.

Cons: When you cram more things in the same space, it just makes sense that will be more frustrating. 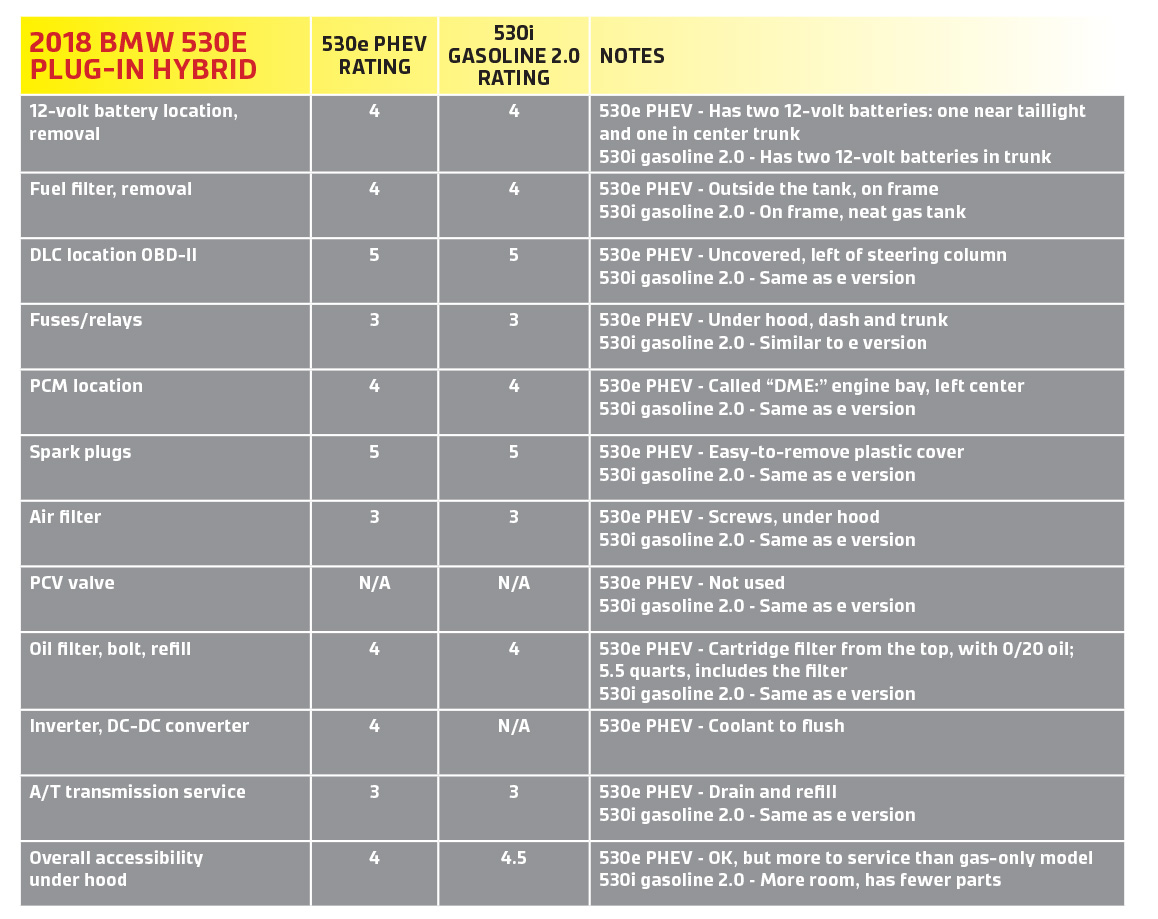