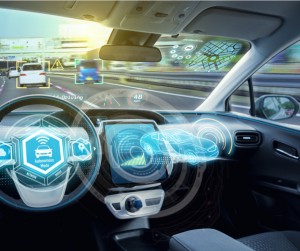 As disposable incomes of individuals have been rising across the world, an increase in luxury offerings for vehicles leads to an inclination in consumer preference toward additional vehicle functions and amenities.

These features can include:

Advanced driving features including ADAS features through autonomous vehicle processing chips are also being marketed as luxury additions in vehicles.

New technologies have also been being adopted in urban areas for establishing smarter cities through intelligent traffic management systems. These various features have accelerated the growth of such AI-based technology products in the automotive and transportation industry.

Due to road safety concerns and increasing need for reliable technologies in vehicles, the demand for such AI-based solutions is anticipated to increase.

Many prominent vehicle manufacturers are present in this region, and along with various regional governments, have promoted the usage of ADAS safety systems and driver monitoring systems in vehicles. Many cities in Asia-Pacific have also adopted ITMS technologies for better traffic flow in their cities. The key players operating in this market have launched new AI-based automotive and transportation solutions and have increased their partnership and collaboration activities over the recent years to expand their businesses, upgrade their technologies, and compete with competitors’ product portfolios. For instance, in March 2019, Nvidia announced its collaboration with Toyota Research Institute-Advanced Development (TRI-AD) for developing self-driving cars. Similarly, in November 2019, Intel’s Mobileye collaborated with NIO to develop self-driving electric vehicles in China.

Driven by the rapid evolution of the end-user industries such as autonomous vehicles and intelligent transportation system, there has been a swift growth in the research and development activities by several important players in the artificial intelligence market for automotive and transportation industry, with the motive of developing advanced AI-based solutions. For instance, in January 2018, Continental AG launched its Centre for Deep Machine Learning in Budapest, Hungary, to expand its expertise in the area of automated driving. Similarly, in November 2018, Continental AG announced that it plans to expand its worldwide network of AI experts by 2021.

Key Questions Answered in the Report: