The speedometer drops off,” my friend Lee told me when he brought in a Jeep Grand Cherokee he wanted fixed. “Then the gauges quit and all the warning lights come on. This thing has been acting crazy on and off for a couple of years. Nobody can figure it out.”

The Jeep belonged to a woman with whom he had recently reconnected: his high school sweetheart. As hard as he was trying to score points with her, I had the impression he was serious. No pressure. Actually, the symptoms list for this Jeep was fairly common. The gauges were dropping off and the windows and door locks weren’t working. The scenario pointed toward a data bus problem.

A failure of any one of those can take down the data bus. And any of the sensors monitored by the PCM, the ground circuits, the alternator or any of the PCI bus wires could short to ground or voltage. I’ve had quite a few of those cases with varying causes, and you can imagine why these kinds of problems aren’t a technician’s favorite challenge. These particular issues have an intermittent nature, too. And here’s the kicker: The problem goes away when you disconnect the alternator. I set out to find out why.

While driving the Jeep, I noticed that sometimes I could get the gauges to drop out by slightly turning the steering wheel. I also checked the horn while doing this. Sure enough, it quit working when the wheel was turned to the right spot. A new clock spring took care of this problem and seemed to fix the issue with the gauges, but they dropped out again after a few weeks of driving.

In fact, that’s what happened to Lee when he was returning the Jeep to his friend. It acted up in Hazard, KY. He took the vehicle to a dealer there and called to ask my opinion after the mechanics determined it needed a new alternator, based on the fact that the problem seemed to go away when they unplugged it.

I told him not to go for it, but they convinced him to spend the money — an easy task considering that Lee would have jumped at any chance to get this issue resolved for his lady friend. But even before he got the car back on the highway, the gauges dropped out. He drove it back to me in Ohio with his assurance of full confidence in my ability to track down the cause.

My research showed that when the PCI data bus has issues, the gauges are the first to go. Many techs thought that the cluster pins or the circuit board could be likely causes. Others suggested unplugging the components until the gauges started working again. Disconnecting the battery seemed to fix the problem, but only temporarily. And some people, like the techs in Kentucky, focused on the alternator because disconnecting it took some of the noise off the data line.

I found that changing the alternator usually includes disconnecting the battery, which starts the reset process and makes it seem as if you’ve fixed the problem. Sometimes it does, for weeks at a time. But replacing the PCM, the cluster and I suspect just about any other component would work as long as the procedure includes disconnecting the battery after changing the part. 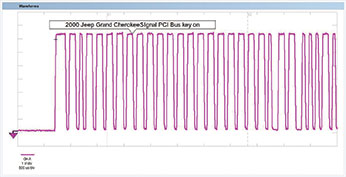 Still, with so many cases of problems with clusters and the different “fixes” applied when the issue reoccurs, I wanted to get to the bottom of the mystery. I started with my scope, looking at the PCI bus to see if I could get some info. You’ll note that Figure 1 shows an image of the PCI bus with the key turned on.

According to the description for the data bus, it should go from zero to 7.5 volts in a square wave pattern. This one looks to be in compliance. If you start the engine, though, the data changes. 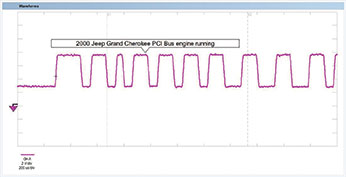 Note the Image in Figure 2. If you look at the bottom of the data square wave you will notice that it no longer reaches zero volts and instead has a new data low nearly 3 volts above ground. This phenomena only occurs after the engine starts and the charging system kicks in. The increase in the ground side voltage although piquing my curiosity didn’t seem to affect the operation of any of the components on the bus. 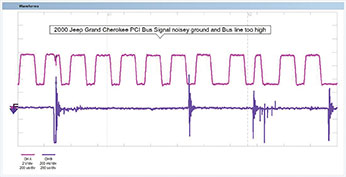 In Figure 3, on page 10, I added the signal ground circuit on Channel 2 and noticed that it had some noise on it. I then began checking all of the ground circuits and found that several of the grounds connected to the engine were frayed from age and miles of engine vibration. I repaired them and the battery cables, which I thought needed similar attention. The new rounds helped some with the spikes on the signal ground circuit but did nothing to change the signal rising 3 volts above ground. Also, while monitoring the data with the scope, I noticed that one group of data had an odd look at times and appeared to spike higher than the rest. This “shark fin” pattern was abnormal and required further investigation.

The PCI bus has a diagnostic junction port connector under the column. This is a critical piece of diagnostic equipment that’s very helpful in tracking these kinds of problems. The connector ties all of the PCI bus lines together and allows the techs to disconnect the modules in groups. Disconnecting the lines one at a time, I discovered that the one allowing the PCI data line to return to normal when disconnected was grouped with the PCM the immobilizer and the right front door module. Disconnecting it also caused the gauges to drop, even though their bus line was still connected. 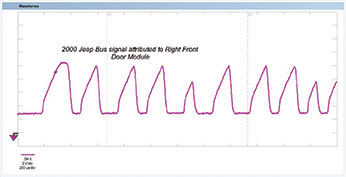 I also learned that data for the gauges goes through the PCM to the body module. I ran a temporary external line from the PCM to the data bus and – Voila! – the gauges were back on line. I then took the data lines out of the immobilizer and the right front door module one at a time and found that the corrupt data definitely came from it. See Figure 4. 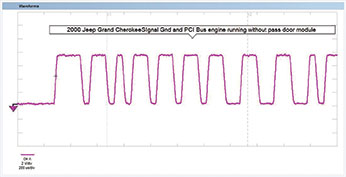 Because that module is ridiculously expensive and on national back order, I ended up putting the right front door module data on a simple on/off switch, which keeps the module offline unless the window needs to be operated. This made everything else work until a module could be ordered. Look at Figure 5 to see what the data looked like without the right front door module data line connected and the engine running.

With confidence, I could then say that the gauges would keep working. I hoped. And after a long weekend test-drive, Lee was all smiles.

This is the kind of job where I feel lucky to have the ability to track and record my findings during the diagnostic process. It’s easier to explain the scenario using the waveforms. I can’t imagine how difficult it would have been to figure this one out without the ability to see the data on the scope, let alone to try to explain it to someone without the images.