What do you get when you team a crackerjack technician with a marketing expert?

A top-notch shop, that’s what!

The best in the nation, according to Motor Age, which annually names what it thinks are the top 10 shops in the nation. It lists Pellman’s Automotive Service Inc. in Boulder, Colo., as the No. 1 shop.

Pellman’s is owned by a husband-wife team, Lisa and Brad Pellman.

He brings to the business a wealth of technical knowledge. And Lisa complements Brad’s know-how with a bachelor’s degree in business from the University of Colorado.

Brad started working in the automotive industry when he was in high school. His first job was pumping gas and busting tires. He later held a variety of jobs, including stints as a lot boy, parts driver, service adviser and finally, technician. He worked for dealerships and independent shops. 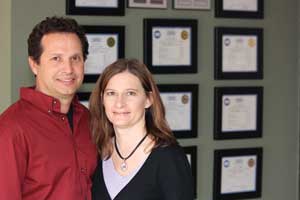 Brad and Lisa Pellman, owners of Pellman’s Automotive Service, say it’s great working together. It’s successful, they say, because they have separate responsibilities and areas of expertise. Lisa handles the behind-the-scenes work – including bookkeeping, marketing, human resources. Brad focuses on customer service and running the shop. Only disadvantage of working together, they say, is that sometimes they take work home and it infiltrates their personal lives.

As they say, Brad “paid his dues.” He learned the business from the ground up.

While working as a technician, he was also enrolled in college, studying computer science. But he decided what he really enjoyed and was good at was working on cars and talking to customers. So he decided to make automotive service and repair his career.

Brad’s extensive experience in the industry gave him a great perspective on what makes a successful auto repair shop.

He and Lisa first looked at purchasing an existing shop, but eventually decided to open their own.

They’ve been in business 18 years.

At first, there was just Lisa and Brad. Now 10 others work there.

What makes their shop so successful? “We’re customer-focused and provide a professional environment,” says Lisa. “From the moment a customer walks through our door, he or she can see and experience the difference.” 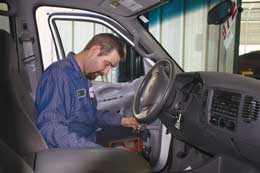 Junior Warembourg uses one of the many
scan tools Pellman’s provides.

Making the “difference,” says Lisa, are these factors:

“All these things are what we call our ‘non-direct marketing strategy,’” says Lisa, “part of what we believe is the best way to get new customers: ‘word-of-mouth’ – it’s our best advertising.”

In short, say Lisa and Brad, treat customers the way you would like to be treated. Be professional and fair. And educate the customer about their car and their options, and let them choose what works best for them.

Their business acumen has earned Pellman’s many awards and certifications, including: 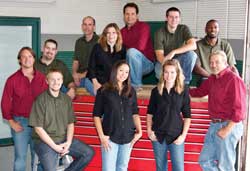 Brad and Lisa both have earned the coveted Accredited Automotive Manager (AAM) designation from the Automotive Management Institute (AMI). Brad is ASE master-certified, holds an AR&D Hybrid and Electric Certifi­cation and has earned many training certificates.

He is president of ASA-Colorado’s Mechanical Division and has served on ASA-Colorado’s board since 2010. He formerly was that organization’s education director. He also serves on ASE’s board of governors, is a board member of the Car Care Professionals Network and serves on the advisory council for the Motorist Assurance Program. Both Brad and Lisa have served on the Tech-Net National Advisory Council for multiple years.

What’s ahead for Pellman’s Automotive? “We’re always striving to make Pellman’s Automotive better,” agree Lisa and Brad. Possibilities for the future include improvements in the shop’s current location and looking into opening additional locations to better serve the firm’s clients.

Name of Shop: Pellman’s Automotive Service Inc.
Location: Boulder, Colo.
Square Footage of Shop: 9,420
Number of Employees: 12
Number of Repairs Weekly: 82
Projected Annual Sales: $1,450,000
Website Address: www.PellmansAuto.com
Why They Are a Member of ASA: “We support ASA because it supports our industry and keeps us aware of issues that might impact our business. We enjoy networking with other businesses and we appreciate the training opportunities ASA provides.”