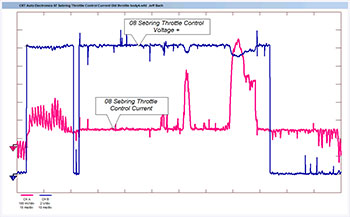 I recently was asked to look at a car by a lady who had been recommended to me by a family member. The car had been seen by an undisclosed number of other shops without resolving the problem.

The car was a 2008 Chrysler Sebring with a 2.4 liter engine. The woman complained that there were times when she stepped on the gas and the car would just idle along. Lately, she told me, the idling had been accompanied by a blinking icon showing two bars and a lightning bolt between them. She said that when the car wouldn’t accelerate, she could turn it off, restart it and it would be OK for an undetermined amount of time.

She had no information regarding previous error codes and said that the shops she had taken it to had just recommended tests, without guaranteeing results.

When she dropped off her car with me, I was able to start it cold and test-drive it. But the symptoms she described didn’t occur, and there were no codes in the computer. I started doing a little Internet research and discovered that her’s was not an isolated case.

I found quite a few complaints about the vehicle’s power train and electronic throttle control system. Many of them had been taken to dealers, with varying results. There were numerous complaints for the ’07-’08 models in particular, with just as many suggested fixes and bad experiences. At least one fix had gained popularity in some forums and on YouTube, but I had no luck with it in this case.

When I experienced the light coming on, but still with no codes, I thought maybe the throttle body needed servicing. A view inside revealed that someone had tried to fix it using a sensor-safe cleaner recommended by the manufacturer. Many of the people who commented online suggested that the idling had put them in dangerous situations, and they didn’t feel comfortable driving their cars.

The second day I had the car – I drove my granddaughter to school and decided to test-drive the lady’s car again – it ran fine until the throttle light came on, and I lost all throttle response. I had just crossed a lane of traffic and was driving up a fairly steep hill when the car lost power.

I felt like a sitting duck as I crept across the highway at just a few miles an hour. By then, I had my flasher on and had collected a line of “in-a-hurry commuters” behind me as I crawled along looking for a place to pull over and get out of the way. After pulling off the road at the first wide burm area, I turned off the car and restarted it hoping for a reset, which didn’t work this time. I then waited for my chance to do an idle U-turn on a curvy hill with limited visibility and finally worked up the nerve to try it, which took three maneuvers to complete.

I had a vision of looking up the hill and seeing a car coming around the curve with someone looking up from their cellphone just in time to see me cross both lanes. Fortunately, no one came.

With the car steadily acting up, I checked it with the scan tool, and it still showed no codes. The data indicated that throttle position sensors (TPS) on the pedal were working, but the TPS signal from the throttle body was not. After switching cars at my granddaughter’s house and taking her to school, I returned to take the Sebring back to the shop. Once there, it started and ran fine, but I was a bit more invested in taking on this diagnostic challenge after putting my granddaughter’s and my safety at risk.

I decided to try getting some signals using my oscilloscope and see if I could capture something useful. And I also searched the National Highway Traffic Safety Administration (NHTSA) website and found numerous complaints for this condition but, surprisingly, no recalls and not even an investigation.

There were some more complaints on a few manufacturer-specific forums, and I saw that there were suggestions ranging from software updates to alternator problems causing interference with the throttle body signal. However, there seemed to be little in the way of test data or test results from any of the Internet sources.

I decided to use the current probe to monitor the throttle motor current while watching one of the throttle position sensors’ (TPS) voltages on the other channel.

All of the automotive drive-by-wire throttle systems that I see work similarly to aircraft systems, with redundant sensors linearly equal and opposite voltages that are well monitored by the powertrain control module (PCM). Lacking evidence of TPS codes during any of the episodes, I hoped to see how well the TPS signal responded to throttle motor current. 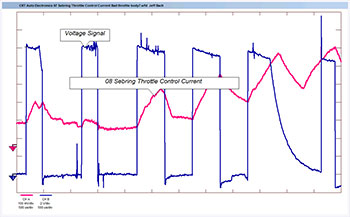 During the next road test, while working normally, the throttle motor current didn’t make sense when compared to the TPS signals. I decided to move the scope lead to the throttle motor voltage signal, assuming that since the throttle was spring-loaded closed, the motor ran to open it.

Feeling now that I had some information I could use, I saw that it looked similar to the pulse width modulation circuits that I’m familiar with. The current signal shown in Figure 2 doesn’t follow the voltage signal as it should do in parts of the waveform. This was caught while the throttle was working. 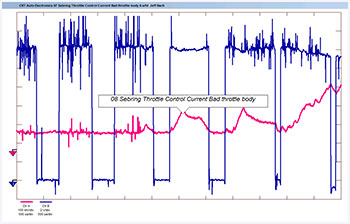 The image in Figure 3 was captured when the throttle stopped responding to the accelerator pedal. This was an indication that the motor circuit had an issue. I looked at a few more signals while actuating the throttle, and, not getting a response, I decided that the throttle body needed replacing. 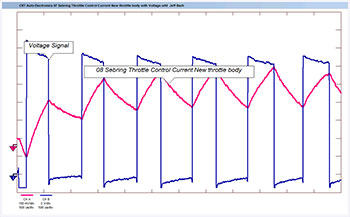 I obtained authorization and ordered a new one from the dealer and then got the image in Figure 4 from the new throttle body. Seeing the interaction of the throttle motor current with the PCM-PWM control on this new throttle body gave me more confidence in diagnosing these kinds of complaints, and it sure would take the guesswork out of the job.

I performed a thorough search trying to come up with a waveform reference for this system and came up empty. Hopefully, relating this exercise will help you when you have similar complaints.