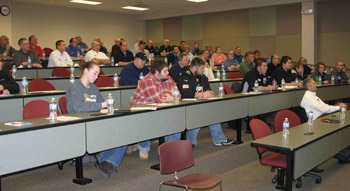 More than 55 people attended the meeting, including students and instructors from a vocational school. In addition to instructors, nine Ivy Tech students (seven young men and two young women) attended the inaugural meeting.

“A special thanks goes to Verne and Barb Menke of Menke’s Automotive Repair in Newburgh, Ind.,” said Risley. “Without their participation, time and effort, this would not have happened.”

Risley also praised local representatives of NAPA and Jasper
Engines for assisting in making formation of the new affiliate possible. And he thanked Ivy Tech Community College in Indianapolis for supporting the new affiliate.

Ivy Tech announced that ASA-Indiana meetings will be held at the school. Students and instructors will attend the meetings and participate in any training at no cost.

Vernie and Barb Menke said, “We are excited about the launch of ASA-Indiana/Evansville, and the great number of shops that signed on at our planning meeting. We want to especially thank our two main sponsors, Jasper Engines & Transmissions and NAPA Auto Parts, for their dedication to our industry. Our goal will be to form an ASA-
Indiana North Chapter in Indianapolis the first of the year. These groups will be instrumental in moving our industry forward in our state.”

Bret Robyck, vice president of NAPA AutoCare, said: “NAPA is excited to work with our installer customers in Indiana through the new ASA affiliate. The newly formed group has solid plans to develop programs and events that build success with each member and NAPA is proud to be a part of it.”

Risley said, “ASA-Indiana/Evansville, NAPA and Jasper Engines’ relationship with Ivy Tech is key because partnering will enhance the school’s vocational program and encourage new students to enter the industry.

ASA announces its newest corporate member – AkzoNobel. Corporate membership provides an opportunity for companies to expand their relationships with ASA and its leaders in the collision and mechanical repair segment of the industry.

“AkzoNobel has been a great supporter of the collision repair industry for many years,” said Dan Risley, ASA president and executive director. “Its support of ASA is a natural extension and evolution of its support for its customers and collision repairers. We are looking forward to working more closely with AkzoNobel in 2015.”