ASA held its “Celebration of Excellence” Aug. 1 at the Henry Ford Museum in Dearborn, Mich. – a site close to ASA’s NACE|CARS 2014 events in downtown Detroit. This traditional awards dinner honors the achievements of ASA members and its industry partners.

Awards and scholarships presented during ASA’s Celebration of Excellence included:

• The Tom B. Babcox Memorial Scholarship, the recipient of which was Steve Geiling, Geiling Service Inc., Metairie, La.
• The BodyShop Business Magazine Scholarship, which went to Patrick Johnson, Brothers Body & Paint Inc., Martinsville, Ind.
• This year’s Arrowhead Automotive Specialty Market “High Octane” Scholarship, which went to Chris Pfefferle, Pfefferle Tire and Auto Service, Fairfield, Ohio.
• The Emil Stanley Merit Award, which was presented to Stefany Lorang, LaMettry’s Collision, Inver Grove Heights, Minn.
• A special AMI Continuing Education Recognition honor, which went to Jerry Holcom, S&S Service Center Inc., Kansas City, Mo., for his commitment to AMI and continuing education.
• ASA’s Phoenix Award, which recognizes an ASA Collision Division member for his or her contribution to the automotive service industry, went to Michael Anderson, CollisionAdvice.com.
• ASA’s Alpha Award, which recognizes an ASA Mechanical Division member for his or her generous and far-reaching contributions to the automotive service industry. Bill Moss, AAM, Euro­Service Automotive, Warrenton, Va., was the recipient of this year’s award.
• The ASA Legislative Award, which recognizes those who have made an impact on legislative and regulatory activities. Diane Larson of Larson’s Service Inc. in Peabody, Mass., was recognized for her efforts to represent ASA at service information hearings and meetings in Massachusetts, as well as other repair-related policy issues.
• The ASA Partnership Award, which recognizes an individual, group or company that has voluntarily worked together with ASA to further the industry and the association. ASA honored Ray Fisher, executive director of ASA-Michigan, for his input, direction and unwavering support of NACE|CARS 2014.
• The ASA Benefit Provider of the Year Award, which is presented to a sponsored benefit provider in appreciation of its relationship with ASA, and for the value, quality and professional service it offers to ASA members. This year’s recipient was AutoZone.
• The Chairman’s Award of Excellence, which recognizes individuals for their outstanding contributions to ASA and the automotive repair industry, went to Roy Schnepper, AAM, Butler’s Collision, Roseville, Mich.

ASA’s next awards program will be held in conjunction with the association’s annual trade shows – the International Autobody Con­gress and Exposition (NACE) and the Congress of Automotive Repair and Service (CARS). The shows will be held July 23-25, 2015. The location has not been determined.

ASA and the Alliance of Automobile Manufacturers hosted the first Technology and Telematics Expo at the NACE|CARS show in Detroit. The expo featured a question-and-answer-style forum with automotive industry leaders. The panelists provided valuable information about the future of vehicle technology and what it means for the modern repair technician. Audience members also participated, posing their own questions to the group. Donny Seyfer, forum moderator and ASA chairman-elect, said, “I could not have been more pleased with the presentations at this inaugural program. The willingness to share information and work with the independent repair shop was evidenced by the participation of the original equipment manufacturers and the National Highway Traffic Safety Administration. I believe each of the nearly 200 participants left the program equipped with valuable information to take back to their shops.” 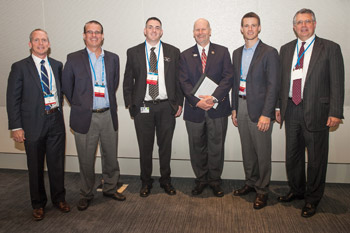