Troubleshooting transmission on ’96 Chevy truck gets complicated with circuits.

Winter in the Midwest brings in some real humdinger problems for us here at CRT Electronics.

The one I’m currently working on is, of course, a rush job because the forecast is for up to 10 inches of snow and freezing rain, and this is the guy’s plow truck. That is what a lot of landscapers do to bring in the bacon when winter hits here. They plow snow for the local retailers. It’s a tough job because most of the work is done in inclement weather and after business hours, needing to be ready for the next day’s business.

This may be the last good snow we’re going to get, and the guy made it clear that he was willing to pay extra if I could get this vehicle working in time for him to get it ready for the upcoming weather. He needed about four hours to put his plow on and get it hooked up. This meant I would be working into the night if I was going to get through at least four hours before the storm.

This particular truck is a 1996 Chevy 2500 series four-wheel drive converted from a diesel to a 350 5.7-liter fuel-injected vortex with an aftermarket powertrain wiring harness and a 4l60E electronics shift transmission. The guy bought it for his landscaping business strictly to plow snow. It had a bad transmission, which he had overhauled at one of the local transmission shops. It came to me with the transmission banging hard when you dropped it into gear. It also had a rough one-two shift and didn’t shift at all from second to third.

The engine had a dead miss and was dumping fuel through the tailpipe while smoking and smelling strong of raw fuel.

I started my investigation with an aftermarket OBD-II scan tool showing a misfire code and a trans solenoid circuit code. Since I didn’t know what year and engine code option to tell my Tech 2 scan tool, it wouldn’t read the data or show me the misfire graphic.

I needed to pinpoint the miss and see why it was dumping fuel first, before I started trying to figure out the transmission problem.

I used the TECH 2 programming mode to query the powertrain control module (PCM) for a vehicle identification number (VIN). That gave me the year and engine code that the PCM came from.

The donor vehicle was a 1996 VIN K or 5.7 liter PFI engine with a 4l60E transmission. This information allowed me to look up a wiring diagram and PCM connector view. From there I could use my lab scope and hook a current probe around the control circuits at the PCM. Figure No. 1 shows me that something is definitely going wrong with the injector control system.

After doing some analyzing, I determined that one of the injectors was being held open either by a shorted injector driver inside the PCM or a problem in the wiring harness.

I could see from the waveform in Figure 1 that the injector pattern was riding on top of a steady 800 mA current. I made the assumption that this was the current from one injector. I hooked up a fuel pressure gauge and cycled the key a few times. The fuel pressure dropped steadily as long as the key was turned on.

There was continuity to each pin in the proper positions in each of the injectors and no continuity to any of the other PCM circuits … until I reached the last injector. The last injector had continuity to its proper control circuit, but also to two other circuits on the PCM connector. These two circuits, which read 10.8 and 20.8 ohms, were transmission circuits. One went to the TCC circuit and the other was the one-two shift solenoid.

I got to checking the PCM harness and discovered that the pigtail that was going to the transmission connector had been run down the left rear side of the engine right across the exhaust gas recirculation (EGR) tube and had melted several of the circuits together. The injector harness pigtail was also inside this section of harness.

Considering the amount of damage and its difficult-to-reach position behind the left rear of the engine, I figured that it might be cost-effective to just get another aftermarket harness. I found a source for the harness and discovered they more or less build these harnesses based on a pre-order with a four- to eight-week lead time. That pretty much limited our option on repairing this one.

I called the owner and gave him my ballpark estimate that he agreed to, with the stipulation that I got the truck back to him in the time we discussed.

I agreed. I ended up repairing a total of eight wires that were either melted, shorted or burned nearly through. I finished the wiring repair just before midnight. When I got through, I put the harness in a protective cover and strapped it up off of the tube and then went for a road test. The truck smoked a good bit at first then cleared up and ran great. The transmission banged hard when engaging, though, and still didn’t shift into third gear. Disappointed, and tired, I went back to the shop for more harness testing. 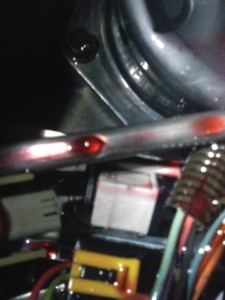 This vehicle came to me as a reference from a transmission shop that had given up on solving the problem, stating that it was a wiring problem. I’m guessing that the second-third solenoid may have been grounded like the injector and causing a lock-up condition, prompting the trans shop to disconnect the solenoid. I reconnected the solenoid and reassembled the trans.

After filling it back up, I retested using the Tech 2. The solenoids were now all working.

I took it for another test drive. This time it ran great, the transmission was shifting into all of its gears and not too harshly. I felt pretty good about the success of this repair considering all of the issues it was plagued with. It was pretty late when I wrote the bill for this job, remembering what my father told me years ago about compromising on your price trying to make the job more affordable. He said charge enough so that you’re happy; if you discount yourself and he’s still not happy, then you’re both disappointed. He always said that if one of us has to walk away with resentment, I hope you get over it.