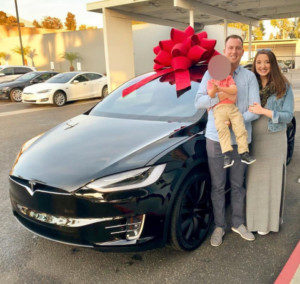 The lawsuit alleges the vehicle fails to include proper safety control devices to ensure the vehicle isn’t unintentionally operated.

“Thank God the airbag didn’t go off and hurt my son too. This happened so easily, how long before it happens to someone else?”

Leaving the falcon doors open to retrieve her toddler and later groceries, she walked toward the garage with her son steps behind.

Suddenly, the 2-year-old runs back, climbs into the driver’s seat, and as Mrs. Harcourt turns back, calling her son from the vehicle, the 5,500-pound SUV accelerates towards her. (Tesla promotes the Model X as the “quickest SUV on Earth,” which can accelerate from zero to 60 mph in just 2.8 seconds.)

At eight months pregnant, Mrs. Harcourt was lifted, carried into the garage, slammed against the wall and pinned. Her pelvis cracked in three places and her right leg was broken.

“I was trapped and had to scream until someone heard me and came for help,” she says.

From behind the wheel, the toddler, seeing his mother hurt, burst into tears. He has been traumatized for months and has required therapy.

Because of the trauma, the baby was delivered prematurely; the mother was unable to have a C-section. “Thank God the airbag didn’t go off and hurt my son too. This happened so easily, how long before it happens to someone else?” Mrs. Harcourt says.

“Tesla’s response is outrageous, the mother, son and unborn baby could have been killed,” said Attorney Alison Gokal. “My clients are absolutely terrified of this happening to another family and want Tesla to prevent a repeat of this tragedy,” says Ms. Gokal.

“We did our research, excited we found the safest car for our growing family, only now we know it is a nightmare,” says Mrs. Harcourt. Tesla promotes the Model X as, “the safest SUV ever.” The police report concluded the toddler drove the Model X.

Tesla admits that the Model X is designed so simply that a two-year-old can operate it. “The driver in this case wasn’t even potty trained,” says Ms. Gokal.

According to the Harcourts, Tesla’s service department confirmed there is nothing they or any other Tesla owner can do to prevent this type of incident from happening.

“Families like us are Tesla’s target market for the Model X,” says Mrs. Harcourt. Tesla promotes cars for children while videos like this from other sources teach children about the Tesla Model X: https://www.youtube.com/watch?v=kfhuzje8Zjs.) “My toddler learned how to start and operate the Tesla faster than an adult can open a childproof bottle. We could have died, the public needs to know,” Mrs. Harcourt adds.