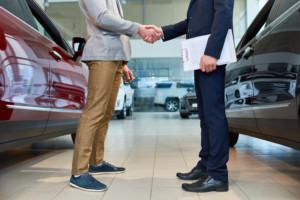 ATLANTA, April 27, 2020 /PRNewswire/ — Historic lows are expected in April as the full effects of COVID-19 are felt across the U.S. auto market for the entire month.

After incorporating seasonal adjustments, the annual vehicle sales pace in April is expected to finish near 7.5 million, down significantly from last month’s 11.4 million and far below last April’s 16.5 million level.

The auto industry has consistent, reliable data reaching back to 1976. In that timeframe, the single lowest sales month was marked in January 2009, in the depths of the Great Recession. Total sales fell to 655,000, and the seasonally adjusted annual rate (SAAR) fell to 9.6 million. The lowest sales pace in the past 40-plus years was 8.8 million, which occurred in December 1981 during the “Double Dip” recession period. Given the massive impact of this pandemic, it seems very likely that the resulting market response in April 2020 will be history making.

Though this forecast is disheartening, there is a silver lining. According to Charlie Chesbrough, senior economist at Cox Automotive, “April is likely to be the sales bottom for the vehicle market during this crisis. Recent sales data suggests demand is starting to recover modestly after the initial shock in March and early April. Year-over-year daily declines, while still high, are consistently showing improvement over recent weeks. Some people want to buy a vehicle or need to buy a vehicle, even in a pandemic.”

Dealership closures, which began in mid-March in many parts of the country, are now being lifted, and sales are slowly improving. Sales should continue to show modest improvement in May as the country gradually reopens, and dealerships implement new strategies to sell and deliver vehicles in ways that are consistent with social-distancing guidelines. For example, more than 10,000 dealers in the U.S. have signed up for Dealer Home Services from Autotrader and Kelley Blue Book, both Cox Automotive companies. And more dealers are choosing to use advanced digital retailing tools, similar to those offered by Cox Automotive, to help customers buy vehicles without visiting a dealership.

Although the national U.S. auto market is expected to fall 53%, geography is a consideration this month because sales vary greatly across the country. Some places face much more severe infection rates, and consumers are very reluctant to go outdoors. Policy responses from state and local officials also vary, with many states on lock-down for weeks, and dealerships closed in large portions of the country. Sales are down everywhere, but some markets are more negatively impacted than others.

As a result of the diverse geographic impact this month, it is likely luxury and vehicles from the Japanese brands are taking a bigger hit, as those products are stronger in the Northeast and West, regions that have been most impacted by COVID-19. Also, high priced products like luxury vehicles are under threat as consumers delay spending during the crisis. Conversely, full-size pickups are doing relatively well thanks to the Southern and Plains states remaining open for much of this crisis. Also, worth noting, aggressive 0% financing offers, which were mostly led by the Detroit brands, have attracted buyers to the market. By mid-April, nearly 20% of new-vehicle sales were being financed with a zero-percent interest deal, up from less than 3% in January. Pickup trucks are showing a strong share of these purchases.

In addition to declines in retail demand from consumers, it is expected that fleet activity will decline significantly in April as well. Strong fleet sales have been a pillar of support for the light vehicle market in recent years as retail demand eroded from high vehicle prices. However, COVID-19 has stopped business and leisure travel, and this will impact the rental car agencies’ need for vehicles. Commercial fleet is likely to decline as well as the new economic realities settle in. Since fleet is about 20% of the retail auto market, the likely decline will exacerbate this historically weak sales month.

Cox Automotive is focusing on segment sales levels as opposed to brand-level sales this month.

All percentages are based on raw volume, not daily selling rate.

Cox Automotive Inc. makes buying, selling, owning and using cars easier for everyone. The global company’s 34,000-plus team members and family of brands, including Autotrader®, Clutch Technologies, Dealer.com®, Dealertrack®, Kelley Blue Book®, Manheim®, NextGear Capital®, VinSolutions®, vAuto® and Xtime®, are passionate about helping millions of car shoppers, 40,000 auto dealer clients across five countries and many others throughout the automotive industry thrive for generations to come. Cox Automotive is a subsidiary of Cox Enterprises Inc., a privately-owned, Atlanta-based company with revenues of $21 billion. www.coxautoinc.com