Curious tech sinks his teeth into a start-stop problem with a Prius hybrid.

My check engine light came on in my Prius,” one of my customers told me. “Is it OK to drive it home?”

“It seems to be running fine. I just need to get home. Then I can get my husband to follow me to your shop.”

“Well, if it’s just the check engine light and it’s running OK and the light’s not flashing, I’d say you should be OK
to drive it.”

Less than 10 minutes later I got a call back from her saying, “The car ran for a couple of blocks and then stalled. And now the big red triangle light is on. What should I do?”
“Will it start and drive?” I asked her.

“It won’t do anything when I try to start it now.”

By this time, I was stumped. “Has it been giving you any problems before this?” I asked.

“It’s been running great and hasn’t given me any trouble – no lights, no problems. I drove it to work this morning, and it was working fine. And when
I went to leave, the engine light came on for the first time in two years.”

“Do you think lightning hit it?” she asked. “A big storm came through today while I was at work.”

“That wouldn’t make sense, that it would let you drive for a few blocks before it quit,” I said.

I must admit I was a bit more than just curious at this point. I didn’t foresee that problem, and I was feeling as if I let her down with my advice. I can usually get a pretty good sense of what to expect on these Gen 1 hybrids from the description of its recent history. I get a few of them shortly after some kind of service has been performed. Service such as an oil change or air filter replacement. But this one hadn’t been touched, and it just acted up out of the blue. Very uncharacteristic.

When I got the car into the shop, I hooked up the scan tool and checked the codes. The high voltage (HV) control had a P3000, which pointed toward a problem with the HV battery. But the HV battery had no codes. I checked the HV battery data and saw that the state of charge (SOC) was showing zero percent. That’s unusual, especially with no HV battery codes.

That presents a circumstance where we need to diagnose an engine condition, but we have no ability to turn it over due to a dead HV battery. I began this quest for answers by pulling the HV battery out and removing the cover to charge the cells. I have a 54-volt charger that allows me to charge seven cells at a time. It only takes about 10 minutes for each sequence of seven cells. This battery has a total of 38 cells.

After restoring the state of charge to about 48 percent, I connected the scan tool and watched some pertinent parameters in the HV electronic control unit (ECU) data. It was clear that the car was not firing. I tested the power circuit for the coils, which was good. I was getting flat lines for ignition current. I thought possibly the ECU was not triggering the coils. I didn’t want to waste any more of the HV battery’s charge than necessary, so I pulled the coils and took out the spark plugs. I had a spare ECU, and it was easy access, so I tried another ECU.

Same codes but still no start. Following the trouble code chart had me going straight to replacing the ECU again. I was a bit confused at this point. I had power to the coils trigger signal and no current flow. I thought about possibly a ground issue, even though I thought if the engine ground was bad, I would get
a ton more codes. But I tested the ground circuit anyway.

Bingo! I had battery voltage on the No. 1 coil ground circuit. I found the location for the coil grounds down low on the end of the cylinder head. The ground terminal was good there. 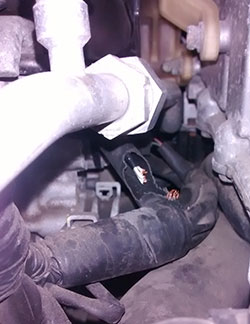 I checked each of the other coils and same story: open between the coils and the ground terminal. I started tripping the harness looking for a break in the wire, and I spotted the problem (see Figure 1). What are the odds that a critter could chew through just the coil ground circuits?

I started to realize that the car drove those few blocks on HV battery power. The customer thought it was running fine, but it was actually cranking until the HV battery went to zero SOC.

I repaired the ground circuits and tested the coils. They were now all firing. I put the plugs and coils back in and cranked it again. Watching the energy monitor on the dash, I could see that the engine was cranking but not starting. This was disappointing since I thought I did well finding the ground wire issue. The strange part about this car is that the gas engine cranks at 1,200-plus rpms and keeps cranking until it starts, sets a no-start code or you turn off the key. The coil codes were gone, but now I got a P3191 no-start code. I managed to catch some interesting crank no-start data that illustrates pretty well what I mean when I say you can’t tell the difference between cranking and starting on these cars.

I started thinking that maybe there were more wires that were damaged, but I couldn’t see anything else. I thought I would just treat it like it just came in with only the code I was seeing.

I checked the oil level. It was good. I then checked the mass air flow (MAF) sensor wire for crud – I do that because it’s common for the MAF sensor to cause a no-start on these cars – and saw the problem in Figure 2.

Now I’m trying to get myself to believe that this critter managed to chew the coils’ ground wires in two, and then somehow packed some chewed nut pieces inside the MAF sensor covering the sensor wire so that the ECU can’t see any air entering the engine. 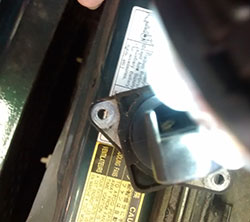 Figure 2: What’s inside this MAF sensor?

I dumped out the chunks and tried again to start the car. It started like you just shut it off. Problem solved. I put the information screen on the dash to the energy monitor and could see the energy arrows going to the HV battery. This is a quick check to see if the engine is running and producing power.

Now that the car is restored to tip-top running condition, I made a suggestion to the customer to follow the advice a friend gave me years ago when I was going to these hang-gliding meets in grass air strips, where mice like to hang out.

Put a dish of peanut butter out beside the car. They’ll leave the wires alone.