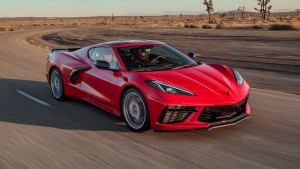 CHICAGO, Feb. 06, 2020 (GLOBE NEWSWIRE) — The Chevrolet Corvette Stingray, the newest generation of an American icon, is MotorWeek’s 2020 Drivers’ Choice Award winner for “Best of the Year.”

The full slate of awards was announced today on the floor of the Chicago Auto Show, the nation’s largest consumer automotive showcase. MotorWeek, TV’s original automotive magazine, has evaluated thousands of impressive cars in nearly four decades – and this year’s top winner deserves all the accolades it will surely receive.

MotorWeek Drivers’ Choice Awards evaluators expressed that this iteration of Stingray, 66 years in the making, has been well worth the wait.

Described as precise, confident, and incredibly responsive, with driver-centric cockpit and ergonomics, they said the Corvette Stingray breaks all the rules written by its predecessors. This eighth-generation design is the first production Corvette with the engine mounted behind the driver while producing an amazingly quiet cabin environment.

MotorWeek Creator and Host John Davis said, “Chevrolet has managed to engineer a vehicle that delivers on performance, comfort, technology, and aesthetics, the likes of which will give its global rivals more than a little heartburn, and they’ve done it all for a base price of just under $60,000.”

“I love the fact that the new Stingray still centers on a naturally aspirated small-block V-8. The new LT2 engine is a delight, and fits seamlessly with the super-fast shifting dual-clutch automatic,” said Davis. “The whole Stingray package is impressively well thought out and executed.”

“We’re honored to have the Corvette chosen as MotorWeek’s Best of the Year winner,” said Steve Majoros, director of Chevrolet passenger car and crossover marketing. “The first mid-engine Corvette represents a huge milestone for Chevrolet and we’re eager for our customers to get behind the wheel.”

The 2020 Drivers’ Choice Award winners are featured on Motorweek.org, and will appear on a special episode of MotorWeek (#3923) airing on public television stations beginning February 8, and on cable’s MotorTrend Network beginning February 18.

MotorWeek and the 2020 Drivers’ Choice Awards are nationally sponsored by The Tire Rack® and RockAuto.

One of the auto industry’s most coveted honors, MotorWeek’s Drivers’ Choice Awards were announced at the largest consumer-driven auto show in North America, the 2020 Chicago Auto Show.

In selecting the annual Drivers’ Choice Awards, the MotorWeek editorial staff evaluates more than 150 cars, trucks, and sports utility vehicles every year. Winners are chosen based on driving performance, technology, practicality, fuel efficiency, and value for the dollar.

MotorWeek is television’s longest-running and most-respected automotive series. Debuting in 1981, MotorWeek launched a new television genre by becoming the first weekly series to offer consumer-oriented car and truck reviews, do-it-yourself car care tips, and the latest auto industry news. Produced by Maryland Public Television, the award-winning series is now in its 39th season. The winner of numerous automotive journalism awards, MotorWeek is a reliable and trusted source of automotive news on television and on the web.

Distributed nationwide and overseas by Maryland Public Television, MotorWeek airs on 92 percent of PBS broadcast stations and can also be seen on cable’s MotorTrend Network. Beginning February 7, MotorWeek programs will be accessible via the PBS Living channel on Prime video, part of Amazon’s streaming subscription service. Program excerpts are available to viewers on the program’s website motorweek.org, and on its YouTube Channel, youtube.com/Motorweek. Fans can like MotorWeek on Facebook and also follow the series on Instagram and Twitter.