Help grow your association and raise the professionalism of your industry! 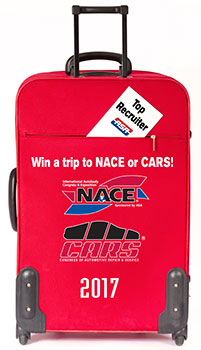 The Automotive Service Association is excited to announce the revival of our successful, grassroots member-recruitment program, designed to reward ASA’s most enthusiastic recruiters – our members. No one can express the value of an ASA membership better than you! You can join the ASA Chairman’s Club simply by promoting the advantages of ASA membership to your automotive service and collision repair colleagues.

Chairman’s Club members share how ASA provides networking, training & education, industry resources and information along with full-time representation in Washington, D.C., that will keep you and your shop performing at their highest levels.

Help grow your association and raise the professionalism of your industry! In appreciation of your efforts, you’ll be recognized with rewards based on the number of members you recruit.

Get rewarded for your efforts with these great prizes:

Recruit One Member:
an ASA tumbler

The top recruiter will be chosen from those who recruit 15 or more members and will be recognized as the annual Membership Recruiter of the Year. This member will be awarded round-trip airfare for one, hotel for 4 nights/3 days plus the NACE | CARS Expo & Conference special ALL Access Pass in 2017. It’s a package worth more than $1,600!*

Promote ASA, and your business, by expanding our network of professional support and strengthening the association that’s Driving Your Success!

For more information about ASA’s new Chairman’s Club Program, visit ASAshop.org/chairmansclub, contact our Membership Services Department by email at chairmansclub@asashop.org or call (817) 893-1109.
If you are attending our upcoming trade shows in Anaheim, stop by the ASA booth, No. 645, Aug. 11-12. Get a colleague to join at the booth and receive your ASA tumbler and Chairman’s Club pin, as well as get placed in a drawing for great prizes donated by our ASA Sponsored Benefit Providers.

*All accommodations will be arranged by ASA (excludes food and beverages). Rules may be subject to change.

Only ASA members in good standing are eligible for the Chairman’s Club. ASA national and affiliate staff and their families are not eligible to participate.