Cell phone use while driving may be tied to other risky road behaviors in young adults: Report

PHILADELPHIA, June 10, 2021 /PRNewswire/ — A new study from researchers at Children’s Hospital of Philadelphia (CHOP) and the University of Pennsylvania’s Annenberg Public Policy Center found that 18- to 24-year-olds who use cell phones while driving are more likely to engage in other risky driving behaviors associated with “acting-without-thinking,” a form of impulsivity.

These findings suggest the importance of developing new strategies to prevent risky driving in young adults, especially those with impulsive personalities. The study was recently published in the International Journal of Environmental Research Public Health. 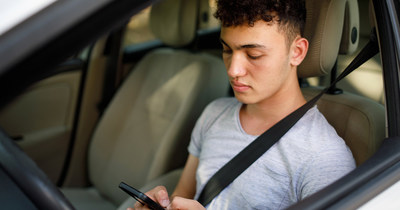 Cell phone use while driving has been linked to increased crash and near-crash risk.

Despite bans on handheld cell phone use while driving in many states, crash reduction results are inconsistent. One explanation may be that those who use cell phones while driving are more likely to engage in other intentionally risky behaviors.

Instead of solely addressing the use of cell phones while driving, the authors suggest training young drivers to avoid all risky behaviors associated with impulsivity and sensation seeking.

“This study found that frequent cell phone use while driving was only one indicator of a more general pattern of risky driving practices associated with prior crashes in young drivers,” said lead study author Elizabeth Walshe, PhD, a research scientist at the Center for Injury Research and Prevention (CIRP) at CHOP and co-leader of CHOP’s Neuroscience of Driving research program. “Assessment of personality traits, such as impulsivity and sensation seeking, may be helpful to identify drivers most at risk in order to provide more targeted interventions promoting safe driving.”

This retrospective study recruited 384 young drivers from across the U.S. to complete an online survey measuring risky driving practices – including cell phone use – as well as history of crashes and impulse-related personality traits. The study found that 44.5% of drivers reported being in at least one crash, and 73% of them reported cell phone use while driving. Those who used cell phones while driving were also more likely to participate in other risky driving behaviors, including ignoring speed limits, aggressively passing vehicles going in the same direction, and running red lights. The use of cell phones was not uniquely associated with prior crashes but was one of several risky activities related to crashes.

“It may be useful to treat cell phone use while driving as part of a group of risky driving behaviors, such as driving while impaired by alcohol,” said study co-author Dan Romer, PhD, research director of the Annenberg Public Policy Center of the University of Pennsylvania and a senior fellow at CIRP. “For example, messages to enhance driver safety might focus on a larger range of hazardous practices that place the driver and others at risk rather than citing only one, like cell phone use.”

This work was supported by the Annenberg Public Policy Center of the University of Pennsylvania and the Center for Injury Research and Prevention at Children’s Hospital of Philadelphia.

About Children’s Hospital of Philadelphia: Children’s Hospital of Philadelphia was founded in 1855 as the nation’s first pediatric hospital. Through its long-standing commitment to providing exceptional patient care, training new generations of pediatric healthcare professionals, and pioneering major research initiatives, Children’s Hospital has fostered many discoveries that have benefited children worldwide. Its pediatric research program is among the largest in the country. In addition, its unique family-centered care and public service programs have brought the 595-bed hospital recognition as a leading advocate for children and adolescents. For more information, visit http://www.chop.edu.