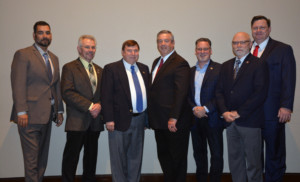 NORTH RICHLAND HILLS, TEXAS, May 8, 2019 – The Automotive Service Association (ASA) had a successful and exciting Annual Business Meeting & Conference April 30-May 2 at the Hurst Conference Center in the Dallas-Fort Worth, Texas community of Hurst.

With a focus on technology and training, ASA offered a variety of classes to bring service professionals up to speed on changes taking place in the industry.

The association also surprised attendees with the launch of ASA’s mobile app. Available to download on iPhone and Android devices, the app was created by MobileSoft, a global leader in mobile app technology.

During the ASA Annual Meeting, ASA Executive Director Ray Fisher, AMAM, installed the 2019-2020 Board of Directors.

General Director: Elissa Larremore, owner of CBS 1 Collision, based in Shreveport, La., will continue her role as general director serving the second year of her two-year term.

General Director: Todd Black, AMAM, owner of Unlimited Service, Bellingham, Wash., will begin a two-year term in the general director role. Black was appointed last year for a one-year term as general director due to a board vacancy, and he was elected earlier this year.

Ray Fisher, AMAM, ASA president/executive director, also serves on the ASA Board of Directors in an ex-officio capacity.

“The quality of the content and the education that our attendees received was first rate,” said Fisher, commenting on the courses offered at this year’s meeting. “I cannot thank our educators enough for their dedication and time at our event. Our theme was to not only acknowledge the challenges of today, but we also wanted to provide solutions that result in future opportunities. The attendees received great takeaways that we know that they will implement in their shops!”

As the new chairman, Wills looks forward to building on ASA’s mission during his term.

“While the ASA Annual Meeting represents a change in leadership, we never change our mission,” Wills said. “I would like to say ‘Thanks’ in a big way to Roy Schnepper. He had a demanding two years, but as a result of his strong leadership and commitment, ASA persevered and became stronger.

“I am looking forward to working with Ray Fisher, our membership, Affiliates, staff and industry partners to pave a strong future for ASA. We will concentrate on strengthening our education focus with AMi so the industry can benefit from the quality shop management training it provides.”

Take a look at the multitude of photos from the three-day meeting and the news release that wrapped it up.

ASA advances professionalism and excellence in the automotive repair industry through education, representation and member services.