Agree with this commentary? ‘Why electric vehicles will dominate in 2021’ 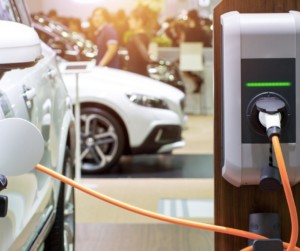 LONDON, June 25, 2021 /PRNewswire/ — Elon Musk, one of the most divisive characters in Silicon Valley, saw his net worth explode by over $100 billion in 2020 alone, setting records in wealth accumulation…

And that’s largely thanks to the dramatic rise of the electric vehicle trend that has taken Wall Street by storm.

Tesla saw its share price skyrocket by over 600% last year…with the EV giant surging past some of the United States’ most influential companies, including Visa, JP Morgan, and Walmart. Its market capitalization is now sitting at just over half of a trillion dollars…And its success has paved the way for the entire industry, as well.

From charging infrastructure and battery makers to EV tie-ins, the electrification of everything is well underway. But this exciting new industry is still in its infancy, and there are a few small tie-ins that are poised to go a long way.

Blink Charging was trading at just over $1.50 last May…But the run-up in electric vehicle stocks has sent this infrastructure play soaring. In just a year, Blink has seen its share price skyrocket by an astounding 1996%…but this could be just the beginning.

Investors are betting big on the future. It’s an “if you build it, they will come” stock story, and it’s still in its first act. Blink is building an electric vehicle charging network, and it has explosive potential.

Why? Because U.S. President Joe Biden is closer than ever to sealing a multi-trillion-dollar deal that will prioritize homegrown renewable energy infrastructure. There are currently only 41,000 EV charging stations in the United States…And the system is almost comically broken.

This is one space that Tesla absolutely dominates…Its supercharging network is second to none. But for non-Tesla-owners, there are simply not enough options. But this could be changing.

In addition to Biden’s plan to ramp up infrastructure deployment, the President is also looking to replace the entire fleet of government vehicles with EVs…That means the pressure is on to get this infrastructure locked and loaded. While there are some private charging initiatives like Tesla’s already being rolled out, they’re unlikely to benefit from Biden’s ambitious infrastructure push…

As Chris Nelder, manager of Carbon-Free Mobility at the Rocky Mountain Institute, explained, “To whatever extent public money is being spent, it should only be spent on sites that are available to the public,” adding, “that’s certainly true for this Biden infrastructure spending plan.”

So while Tesla’s supercharger network has turned a lot of heads…The real explosion is still to come. And Blink is one of the few companies that already has an edge in this looming infrastructure boom.

The world is changing, that much is certain. The largest transfer of wealth in history is currently taking place…And companies are being forced to adapt or die.

Millennial money is pouring into the stock market, fueled in part by zero fee trading apps…And the most successful businesses might in future be those with a focus on green energy and technology. Facedrive (FD,FDVRF), in particular, encapsulates these demands perfectly.

It’s the tie-in of tie-ins because it’s built an entire ecosystem with connections to the electric vehicle industry. From ride-sharing to carbon-offset food delivery, it’s captured two rapidly growing segments under a single umbrella. And it hasn’t stopped there.

They’ve already re-imagined ride-sharing, providing a cutting-edge carbon-offset alternative to the giants of the industry, Uber and Lyft…But now they’re looking to challenge the notion of car ownership as we know it.

The headlines say it all …

“Millennials Turn Their Back On Car Ownership”

And Facedrive saw this coming a mile away. With its acquisition of Steer, a subscription-based electric vehicle business, users can order a Tesla, Porsche, or Audi EV that will be personally delivered directly to their doorstep.

Not only does this mean you can enjoy the quality and luxury of these top-tier brands, but you can also drive a fully insured electric vehicle when you want it, without having to worry about buying an asset that loses most of its value as soon as you drive it off the lot. This simple concept effectively allows users the ability to lease any number of vehicles without committing to – or paying an outrageous upfront cost for – one specific car.

This is how you’ll probably drive a Tesla in the future. Or, an Audi e-Tron. And this is an important development…Younger generations just aren’t interested in owning….most things.

Subscription services have grown by leaps and bounds. From fashion and hygiene to media consumption… And even housing. The new generations want convenience, freedom, and variety.

This is the ‘subscription economy’…And the numbers speak for themselves:

There’s a subscription for most everything…And Facedrive (FD,FDVRF) has positioned itself to fit in the middle of the booming new business model and the electric vehicle market that is set to grow exponentially in the years to come.

Fisker is a fairly speculative play in the EV world…In fact, it won’t even begin producing its electric SUVs until 2023. But that doesn’t mean it’s not worth watching.

It’s probably one of the most reasonably-priced EV stocks on the market. It’s a slow burner that’s quietly sealing massive deals while doing its best to stay out of the limelight.

And in a market full of overblown valuations fueled by a hype-machine that just can’t quit… Fisker is a breath of fresh air.

It won’t start producing its EV SUVs until 2023. But again, it’s a story stock that looks a lot like Tesla did in the early days.

Citigroup analyst Italy Michaeli recently picked up coverage of Fisker, with a “Buy” rating and a price target of $26. Michaeli gets the narrative here, reminding investors that “as a pre-revenue company, Fisker is clearly a higher-risk investment proposition”, but there’s a big reason to be bullish…

It’s already got 9,000 advance orders … prepaid. And when it does come out with its first Ocean SUV, it will be at a $40,000 price point and a super flexible lease set-up that could be incredibly disruptive …and at exactly the right time.

Chinese Electric Vehicle Companies Are Facing Off For Market Dominance

NIO Limited (NIO) was once just a pipe dream for investors in the EV market. It was even on the brink of bankruptcy But China’s answer to Tesla’s dominance powered on, eclipsed estimates, and most importantly, kept its balance sheet in line.

Then, in November of 2020, NIO unveiled a pair of vehicles that would make even the biggest Tesla devotees truly contemplate their brand loyalty. The vehicles, meant to compete with Tesla’s Model 3, could be exactly what the company needs to take control of its domestic market.

Li Auto (LI) was founded in 2015 by its namesake, Chairman and CEO Li Xiang. And while it may not be a veteran in the market like Tesla or even NIO, it’s quickly making waves on Wall Street.

Backed by Chinese giants Meituan and Bytedance, Li has taken a different approach to the electric vehicle market. Instead of opting for pure-electric cars, it is giving consumers a choice with its stylish crossover hybrid SUV. This popular vehicle can be powered with gasoline or electricity, taking the edge off drivers who may not have a charging station or a gas station nearby. And in April, Li Raised another $862 million for further research and development.

XPeng Motors (XPEV) is a newcomer in the Chinese electric vehicle boom. Though it only recently went public in the U.S., it’s taken the market by storm. Riding on the coattails of the success of Tesla and NIO, it has carved out its own demand, especially among the younger generation of traders looking for the next big company to blow.

In addition to retail interest, Xpeng has also received a ton of interest from Big Money. Earlier this year the company raised over $500 million from the likes of Aspex, Coatue, Hillhouse Capital and Sequoia Capital China, and even more recently, secured another $400 million from heavy hitters such as Alibaba, Qatar Investment Authority and Abu Dhabi’s sovereign wealth fund Mubadala. And now, it’s looking to raise even more.

The Leader In The Market

Tesla Inc. (TSLA) is an American automotive and energy company based in Palo Alto, California. Founded by Elon Musk in 2003, the company specializes in electric cars, lithium-ion battery energy storage, solar panels and also sells its products online. Tesla’s first car was the Roadster sports car which became a reality when they began accepting orders for it on July 22nd 2008. The company has gone through many ups and downs over the years but recently they have been experiencing more success than ever before with their Model S sedan that received critical acclaim from both Consumer Reports as well as Motor Trend magazine who named it Car of the Year 2013.

Tesla was the talk of Wall Street in 2020. Throughout the year, the de facto king of electric vehicles dominated headlines and defied expectations. The meteoric rise by Tesla stock has seen CEO Elon Musk leapfrog several billionaires including Bill Gates to become the second-richest man on earth with a net worth of over $155 billion. Musk even briefly surpassed Jeff Bezos at one point to become the richest man in the world.