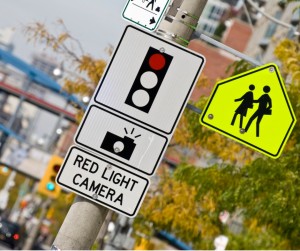 WASHINGTON, D.C. — Red light and speed cameras are powerful enforcement tools that have been shown to reduce crashes, but programs must be carefully implemented to maintain community support.

A new checklist released by AAA, Advocates for Highway and Auto Safety, the Governors Highway Safety Association (GHSA), the Insurance Institute for Highway Safety (IIHS) and the National Safety Council (NSC) can serve as a roadmap for communities that are establishing or expanding automated enforcement programs.

“Research by IIHS and others has shown consistently that automated enforcement curbs dangerous driving behaviors and reduces crashes,” says IIHS President David Harkey. “We hope this document developed with our highway safety partners will help communities take full advantage of this tool.”

Speed is one of the biggest dangers on the road. In 2019, 9,478 deaths — more than a quarter of all traffic fatalities — occurred in speed-related crashes. Higher speeds make crashes more likely and make the crashes that happen more severe. Even as states have raised speed limits in recent years, drivers have continued to exceed those limits.

Red light running, meanwhile, kills hundreds of people and injures tens of thousands every year. In 2019, 846 people were killed and an estimated 143,000 were injured in red light running crashes. Most of those killed were pedestrians, bicyclists and people in other vehicles and not the red light runners or passengers riding with them.

“Red light running and speeding are known killers on our roads,” says Advocates President Cathy Chase. “Well-designed and implemented automated enforcement programs can deter these hazardous driving behaviors and reduce crash deaths and injuries. They can also provide an equitable, neutral option for upgrading safety. We urge states and localities to use this checklist together with road safety infrastructure improvements to help protect motorists, bicyclists, pedestrians and other vulnerable road users.”

Despite the large body of research showing the effectiveness of camera enforcement, the devices are not as widely used as they could be. Some 340 U.S. communities currently operate red light cameras, down from more than 500 during 2011-14. Speed cameras are less widespread, but their use has been going up slowly. Currently, 159 communities have automated speed enforcement programs.

The new checklist builds on one for red light cameras that was introduced in 2018 by AAA, Advocates, IIHS and NSC.

“We know from the AAA Foundation for Traffic Safety’s research that more than two people are killed every day on U.S. roads by impatient and reckless drivers blowing through red lights,” says Jill Ingrassia, AAA’s executive director of advocacy and communications. “Automated enforcement can play a role in a comprehensive strategy to address dangerous driving behaviors and improve traffic safety for all road users. This new set of best practice guidelines is an excellent starting point in helping jurisdictions ensure these programs are well-designed, data-driven, transparent and equitably implemented.”

The addition of speed cameras to the checklist comes amid a growing awareness of the role speed plays in traffic deaths. As U.S. roads emptied out during the first part of the COVID-19 pandemic, those who remained on the road began speeding more frequently, resulting in more fatalities even amid a decrease in driving.

“After a year in which excessive speeding became commonplace nationwide and in the midst of a historic surge in pedestrian fatalities, we need to be considering all options to get drivers to slow down,” says GHSA Executive Director Jonathan Adkins. “States and communities should use this new resource to integrate automated enforcement into a comprehensive strategy to combat dangerous speeding.”

The checklist aims to address some common concerns about cameras. Public support for the programs can erode when they are poorly run or when people believe their purpose is to generate revenue rather than to prevent crashes.

“Automated enforcement is proven to reduce speeds and save lives as one tool in the safe system approach,” says Lorraine Martin, president and CEO of the National Safety Council and chair of the Road to Zero Coalition. “With inclusion of equity, transparency and community participation as critical planning and implementation components, the new automated enforcement checklist will enable stakeholders to focus on safety rather than financial gain and to address speed, reduce red light running and improve mobility.”

As the checklist makes clear, safety and transparency should guide all decisions about camera programs. If the cameras are doing their jobs, communities should expect revenue to decline over time as fewer drivers violate speed limits or run red lights. Any obvious problems with sightlines, signage or signal timing that are keeping drivers from obeying the law should be corrected before cameras are installed.

Public input is key. The checklist recommends convening an advisory committee made up of stakeholders such as law enforcement, victim advocates, civil rights advocates, school officials and residents to help make decisions about guiding principles and other aspects of the program.

Automated enforcement should be viewed as one tool among many that can be used to make roads and intersections safer. Even if a community proceeds with an automated enforcement program, roadway design improvements and other changes should also be considered.

AAA provides more than 62 million members with automotive, travel, insurance and financial services through its federation of 30 motor clubs and more than 1,000 branch offices across North America. Since 1902, the not-for-profit, fully tax-paying AAA has been a leader and advocate for safe mobility.

Advocates for Highway and Auto Safety is an alliance of consumer, medical, public health, law enforcement, and safety groups and insurance companies and agents working together to improve road safety in the U.S. Advocates’ mission is the adoption of federal and state laws, policies and programs that prevent motor vehicle crashes, save lives, reduce injuries, and contain costs.

The Insurance Institute for Highway Safety (IIHS) is an independent, nonprofit scientific and educational organization dedicated to reducing deaths, injuries and property damage from motor vehicle crashes through research and evaluation and through education of consumers, policymakers and safety professionals. IIHS is wholly supported by auto insurers.For more information from NSC, go to nsc.org

The National Safety Council (NSC) is a nonprofit organization whose mission is to eliminate preventable deaths at work, in homes and communities, and on the road through leadership, research, education and advocacy. Founded in 1913 and chartered by Congress, NSC advances this mission by partnering with businesses, government agencies, elected officials and the public in areas where we can make the most impact.