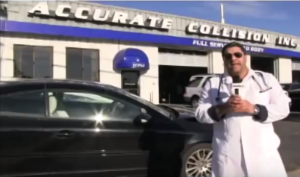 BOSTON (AP) — Authorities say the owner of two Massachusetts auto body shops has been charged with using sledgehammers and mallets to further damage cars he was repairing in order to get higher insurance payouts.

Attorney General Maura Healey announced Monday that 42-year-old Adam Haddad, of Shrewsbury, has been indicted on 42 charges, including 18 counts of insurance fraud.

The attorney general says surveillance footage from one those locations shows him using mallets, sledgehammers, and pieces of wood to intentionally damage to five customers’ vehicles to inflate appraisal repair quotes. He would then allegedly pocket the insurance payout and not complete repairs.

Haddad tells the Telegram & Gazette that the charges ‘‘are news to me.’’