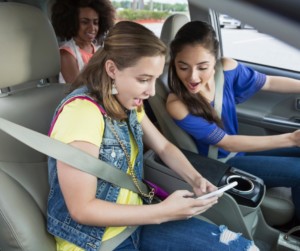 How much is distracted driving affecting roadways?

How much more likely is it for a crash to occur if drivers are interacting with a smartphone?

Drivers who use a handheld phone increase their risk of crashing by two to three times compared to a sober, alert driver according to the Virginia Tech Transportation Institute. Prior to putting the car in gear, drivers should consider silencing their phones, turning on the ‘do not disturb function’ or placing them out of reach altogether in the car.

How many drivers utilize ‘do not disturb while driving’ mode?

Looking at drivers who had iPhones specifically, the Insurance Institute for Highway Safety found that only one in five had Apple’s ‘do not disturb while driving’ mode activated.

Around 10 percent of fatal crashes resulted from distracted driving—why do researchers think this is a low estimate?

Is it fair to only blame smartphones for issues related to distracted driving?

To avoid becoming a statistic, GEICO urges drivers to switch their phones to ‘do not disturb’ mode, leave their GPS’ alone, plan their meals outside of driving times and set playlists in advance.